Russian forces jammed GPS in northern Norway again last month. The effects were particularly felt by aviation and telecommunications. This follows a similar week-long jamming episode in the same area in September, and jamming in the Baltic later that month which disrupted cell phone service in parts of Latvia, Sweden and Norway. It also came at the same time as Russia reportedly began jamming and disabling sophisticated US weapon systems in Syria.

The jamming in Syria, an active war zone, is understandable, but why are they continuing to jam in Northern Norway?

“Routine military exercises” is always the official Russian response. Yet exercises with simulated jamming are just as effective. Lab tests, live exercises deeper inside Russia, field operations in the Ukraine and Syria – all have ensured the Russian military knows precisely how well their jamming equipment works. They have no need to disrupt and endanger Norwegian air traffic and lives to ensure military readiness.

The most likely answer is that this is a form of intimidation – both of Russia’s immediate neighbors and the larger global community. 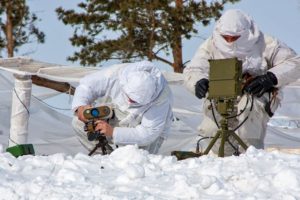 Intensive military training on the Russian side of the border creates increasing communications troubles for nearby Norwegians.

The Norwegian Ministry of Foreign Affairs now confirms to Aldrimer.no that it has taken contact with Russian authorities about the issue.

The concern comes as civilian aviation and communications systems have repeatedly been jammed in connection with nearby Russian military activities.

Ministry press spokesman Frode Overland Andersen confirms that there in March this year «on several occasions was reported loss of GPS signals in Eastern Finnmark», the region located along the Russian border.

The situation was similarly serious in September 2017, when airliners from companies SAS and Widerøe in periods had to navigate with the help of radio signals due to loss of GPS when they entered the East Finnmark airspace. The jamming coincided with the major Russian military exercise «Zapad».