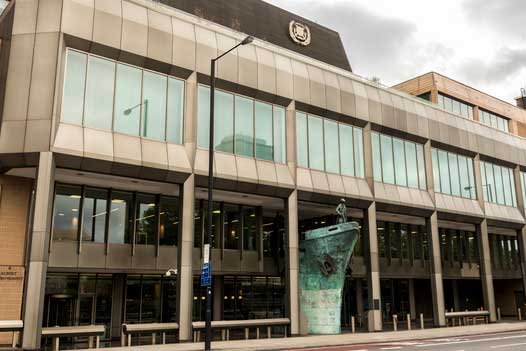 Responding to a plea from 14 maritime organizations in the fall of 2019, the U.S. Coast Guard has protested disruption of GPS and GNSS signals to the International Maritime Organization (IMO).

IMO is the United Nations body that coordinates and sets standards for international maritime operations and safety.

In a paper dated March 10, the service said that GNSS signals are “essential to safe and efficient navigation and an integral component of all maritime operations.” Interfering with them “jeopardizes the safety of life at sea.”

Deliberate disruptions in the eastern Mediterranean and the Black Sea, the paper says, affect vessels operating in international waters and engaged in innocent passage through territorial seas.

While nations typically have a right to do as they wish in their sovereign territory, they are also obliged to not have that intrude into other nations’ territory or international waters. This is also true for vessels passing through their waters but not calling at their ports, known as “innocent passage.”

The International Law of the Sea Treaty stipulates that, in the absence of some clear wrongdoing such as piracy, drug smuggling or discharging oil, vessels be allowed to pass through territorial seas unmolested by the coastal state.

The Coast Guard paper also points out that nations have other treaty obligations that prohibit this kind of activity. International Telecommunication Union Radio Regulations prohibits “All transmissions with false or misleading identification…”

Citing a March 2019 report in GPS World, the paper also documents that GNSS disruption is a global problem not confined to just one or two areas. A study by the German Aerospace Center (DLR) found interference during every phase of a vessel’s voyage between Europe and the Far East.

The Coast Guard paper was submitted for consideration at IMO’s Maritime Safety Committee that had been scheduled to meet on May 13, but has been postponed due to the COVID-19 emergency.

This resulted in a resolution describing the eliminating interference as an urgent need.

About the same time the U.S .Coast Guard paper was due to be considered, IMO was to engage in the early stages of considering rules for autonomous vessels. Its Facilitation Committee was scheduled hold a “Regulatory scoping exercise for the use of Maritime Autonomous Surface Ships (MASS)” at a meeting the end of April. This meeting has also been postponed.

While not specifically mentioned, navigation issues will undoubtedly be part of the considerations when discussion of rules for autonomous shipping eventually takes place.

Public input to these international meetings is always sought in advance. For example, the U.S. State Department had announced a meeting for April 6 to receive public input on U.S. positions for the various issues to be discussed at the Facilitation Committee.

While we understand that this meeting will also be also be postponed, comments can be submitted to the points of contact listed in the Federal Register announcement as well as be raised during the eventual meeting.