Blog Editor’s Note: Space launches are on the upswing with over 12,000 new satellites scheduled to go into orbit in the next several years. Most launches will put multiple satellites in space, but that still leaves lots of rockets making holes in the ionosphere. We went to the Space.Com launch calendar and counted over 40 more publicly announced launches scheduled for the rest of this year. 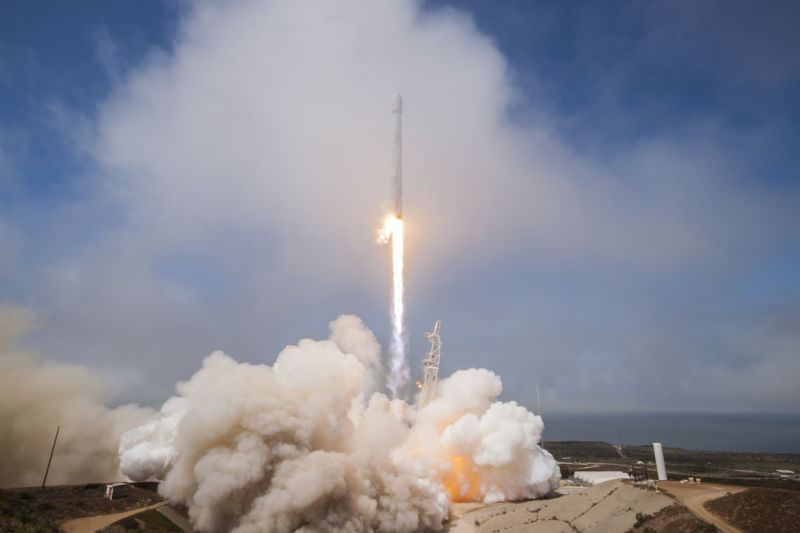 The Formosat-5 mission launches in August, 2017, from Vandenberg Air Force Base in California. Ars Technica

Contrary to popular belief, most of the time when a rocket launches, it does not go straight up into outer space. Rather, shortly after launch, most rockets will begin to pitch over into the downrange direction, limiting gravity drag and stress on the vehicle. Often, by 80 or 100km, a rocket is traveling nearly parallel to the Earth’s surface before releasing its payload into orbit.

However, in August of last year, a SpaceX Falcon 9 rocket launch from California did not make such a pitch over maneuver. Rather, the Formosat-5 mission launched vertically and stayed that way for most of its ascent into space. The rocket could do this because the Taiwanese payload was light for the Falcon 9 rocket, weighing only 475kg and bound for an orbit 720km above the Earth’s surface.

As a result of this launch profile, the rocket maintained a nearly vertical trajectory all the way through much of the Earth’s ionosphere, which ranges from about 60km above the planet to 1,000km up. In doing so, the Falcon 9 booster and its second stage created unique, circular shockwaves. The rocket launch also punched a temporary, 900-km-wide hole into the plasma of the ionosphere.

Scientists used to think the Sun’s radiation dominated the Earth’s extremely tenuous atmosphere in the ionosphere, but in the last decade they have begun to understand that weather at the planet’s surface can also change conditions far above. Researchers are increasingly interested in the effects of rockets, too. This is because disturbances in the ionized and neutral particles of the ionosphere have consequences for satellites, such as causing errors in Global Positioning System navigation.

In the past, scientists have observed numerous examples of V-shaped shockwaves in the ionosphere, as rockets have flown through the upper atmosphere along nearly horizontal trajectories. These have come from Chinese rockets, North Korean missile launches, and some of SpaceX’s other, more conventional Falcon 9 launches.

In the case of Formosat-5 mission, the rocket reached an altitude of 300km after about 5 minutes, and because of its vertical motion, it created not a V-shaped wave but rather giant, circular shock waves, according to a new paper in Space Weather. These circular waves extended over 1.8 million square km, or about four times the area of California, over the western United States and Pacific Ocean region. The scientists say these are the largest circular shockwaves known to have been induced by a rocket launch.

A few minutes later, an “ionosphere hole,” which appeared 13 minutes after launch, was potentially of more consequence for GPS systems. This occurred when exhaust plumes from the Falcon 9 rocket’s second stage depleted plasma levels across a 900-km wide area, which the scientists say probably caused about a 1-meter error in GPS navigation programs.

The lead author of the new study, Charles C.H. Lin of the National Cheng Kung University in Taiwan, said a rocket launch acts somewhat like a small volcano eruption, dumping energy into the middle and upper atmosphere. In the case of this Falcon 9 launch, it induced a plasma hole that lasted for two to three hours, which a magnitude comparable to a magnetic storm. The magnetic storm effect is global, however, whereas the rocket effect is regional.

By itself, Falcon-9 induced error for GPS navigation devices was not too significant, Lin told Ars. “Without considering the rocket launch effects, there are errors from ionosphere, troposphere and other factors that will produce up to 20-meter errors or more,” he said.

Typically, navigation software can adjust for these kinds of uncertainties, but sometimes when a GPS steers you to a wrong address, it may be because of these ionospheric perturbations.

When it comes to self-driving systems, in which GPS navigation results are integrated into the system, the impacts of these errors can become much more important, Lin said. Rocket launches may prove increasingly consequential, especially at a time when there are more of them and they are becoming more powerful.

“Human are entering an era that rocket launches are becoming usual and frequent due to reduced cost by reusable rockets,” Lin said. “Meanwhile, humans are developing more powerful rockets to send cargoes to other planets. These two factors will gradually affect the middle and upper atmosphere more, and that is worthwhile to pay some attention to.”