Blog Editor’s Note: Not all problems with space services are best solved in space. Yet it seems that the way our budgets and policy making are stove-piped, that is the only way we are addressing problems. See yesterday’s post regarding the Secretary of the Air Force;s comment about the glass house. 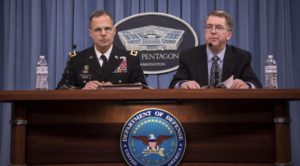 Officials said this budget marks a “pivot” in military space programs from systems that were built for an era when the United States was unchallenged in outer space to a future when adversaries like China and Russia could threaten U.S. access and freedom to operate in space.

“We are in a more dangerous security environment than we have seen in a generation,” said Maj. Gen. John Pletcher, the Air Force budget director. “Global trends are eroding our advantage in the air and space,” Pletcher told reporters on Monday. He said the new mantra is “defendable space.”

The 2019 space budget is 1.5 percent larger than the $7.8 billion request for fiscal year 2018. Overall, the president is proposing a $686 billion budget for the Defense Department, of which $236.7 billion is for research, development and procurement of weapon systems.

Pletcher said the Air Force’s space budget is up by 8 percent, even though the service is cutting procurement of space systems by more than a billion dollars. The Air Force’s $2.5 billion space procurement request is down from $3.4 billion a year ago. The growth is in research, development and operations. The Air Force increased R&D for a new missile-warning constellation from $71 million to $643 million, and added $452 million for the development of a new GPS satellite. In the operations and maintenance account, it included $8.5 billion for space forces — up from $7.2 billion in 2018.