Another Reason to Use GPS Jammers – Police Tracking Darts

Editor’s Note: There are all kinds of reasons why people buy and use illegal GNSS jammers. Sometimes they are even inadvertently advertised by the media. Last year we posted a newspaper story about criminals who had used a GPS enabled tracking device to follow a man home from the casino and rob him of his winnings. Below is a post from member Guy Buesnel’s excellent Linked-In group on GNSS Vulnerabilities of another great motivator for folks to buy and use GPS jammers.

Michael Mayer of the ITSF Steering group found this article in CBC News – apparently the police in Ontario will be using GPS trackers launched on a dart, in the hope that it will result in less high speed pursuits… 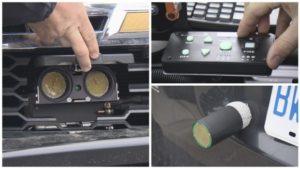 Batmobile-style gadgetry unveiled Friday by Ontario Provincial Police will allow them to catch speeding vehicles by shooting high-tech GPS tracker projectiles at them.

“We’re very excited about this,” Blair said in an interview.

The projectiles are roughly the size of soup cans and are fired from the front grille of police vehicles.