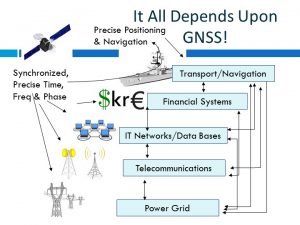 From discussion and passage of a United Nations’ Resolution calling on member states to address threats to critical infrastructure:

“JÜRGEN STOCK, Secretary-General of the International Criminal Police Organization (INTERPOL), spoke by video teleconference, saying that the consequences of an attack could be far-reaching given the interdependence of infrastructure across different sectors and industries.  A single point of failure could lead to the disruption or destruction of multiple vital systems, and that created an appealing target for those intent on causing harm…”

Certainly an issue for the United States and Europe with space-based navigation and timing given wide dependence and the absence of alternative terrestrial systems like the ones in use in Russia, China, Iran and elsewhere.

The resolution itself includes the following language:

“Expressing concern that terrorist attacks on critical infrastructure could significantly disrupt the functioning of government and private sector alike and cause knock-on effects beyond the infrastructure sector,

Read the discussion and resolution here.