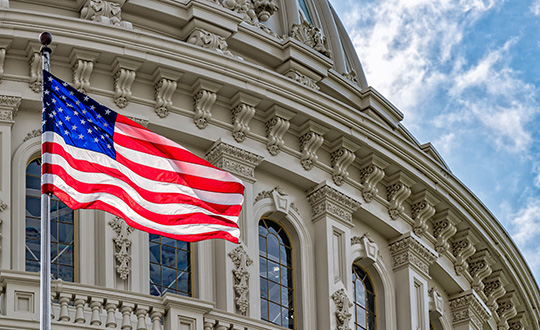 The Biden administration’s budget proposal delivered to Congress last week includes $17 million for the small Department of Transportation (DOT) office responsible for leading civil positioning, navigation and timing (PNT) efforts for the nation. This is a marked increase over the $2 million allocated in 2020 and estimated $5 million being spent this fiscal year.

At the same time, it seeks to repeal the National Timing Resilience and Security Act of 2018 that mandated DOT establish a terrestrial timing backup for GPS. This, despite the findings of a recently published RAND study completed for the Department of Homeland Security (DHS), and other input from a telecommunications industry group.

The administration’s budget proposes $17 million for the DOT Office of Research and Technology to be split among three areas of effort.

Monitoring and detection. The first is a $3.5 million “(GNSS) performance monitoring and interference detection” project. This is a one-time request that is expected to be followed by a request for $1 million in yearly funding to maintain and operate the capability.

While these may not seem like sufficient funds to many, DOT is tasked with working with other departments and agencies, and to leverage existing capabilities. The National Geospatial-Intelligence Agency (NGA) is specifically named as an important partner with DOT in this effort. NGA already has responsibility for issuing worldwide navigation warnings for U.S. interests. It also has access to a wide variety of information that could be used for the project.

Signal authentication. Another $3.5 million is proposed for Executive Order (EO) 13905 Implementation and GPS Signal Authentication. The EO was issued in February 2020. It seeks to leverage market forces and education to create additional sources of PNT and encourage users to access them. This approach has been criticized by many as unworkable without extensive regulation and mandates for users, while still not addressing the majority of American companies and users.

$1.5 million of this $3.5 million will go to further implement the EO through development of a “PNT threat space model” and otherwise support inter-department PNT profile and research and development efforts.

$2 million would be allocated for a one-time investment in GPS signal authentication to “result in the development and validation of requirements for data and signal authentication capability for civil GPS,” reads the proposal. DOT has regularly requested much greater sums to establish civil signal monitoring, leading many to believe the requirements are already well known. One industry observer suggested this could be “a study in lieu of action.”

More surprising to many than the significant increase in proposed funding is inclusion of a proposal to repeal the National Timing Resilience and Security Act of 2018 (NTRSA).

One congressional staff member expressed shock at seeing that provision. “The act was the epitome of thoughtful, bipartisan congressional effort,” the staff member said. “It was co-sponsored in the Senate by Markey and Cruz, for crying out loud. You can’t get more bipartisan than that. To have this dumped on us without any notice or consultation is amazing. It is not something I would expect from this White House. I am not sure how serious a proposal it is.”

Some observers on the hill and elsewhere have opined that, rather than the repeal proposal being a well-vetted administration policy, it is an effort by OMB staff held over from the previous administration to carry forward and preserve President Turmp’s Executive Order 13905 and other PNT policies. Rather than focusing on establishing a GPS backup capability, they instead urged PNT users to find and pay for alternatives on their own.

Compounding the surprise is the exceptionally harsh tone in the proposal, and assertions that many claim are outright false.
Among the problems with the language seen by observers is its assertion that NTRSA seeks to establish a single backup for GPS services.

“It’s unclear to me where such an assertion is supported in the record,” said Greg Winfree, former Assistant Secretary at DOT in the Obama administration. “NTRSA requires the department to incorporate findings from the GPS back-up demonstration program. That project found a variety of systems are needed to protect America,” he said. “NTRSA does require establishment of at least one system, which is incredibly important. Without at least one alternative in place, GPS is one of highest priority targets for our enemies. We have to get the bullseye off of GPS. NTRSA does that.”

This point on national security was reinforced by Scott Pace, head of the Space Policy Institute at George Washington University (GWU). Pace was executive director for the Space Council in the Trump administration. At a recent GWU webinar on the topic, he commented that having an alternative to GPS will contribute to national security and improve global stability. It will “lower the pressure on us to escalate and respond” should GPS satellites be damaged, or services disrupted, he said.

China, Russia, and other nations have terrestrial PNT alternatives to GNSS already in operation. This imbalance creates strategic and tactical problems for the United States, according to many analysts.

The proposed budget also describes NTRSA’s goal of providing at least one backup as “inefficient, anti-competitive and potentially harmful to the existing market for back-up/complementary PNT services.”

“Exactly the opposite is true,” according to Diana Furchtgott-Roth, GWU economics professor. Until January of this year, she led civil PNT issues within the Trump administration as a Deputy Assistant Secretary for Research and Technology at DOT. “DOT’s Complementary PNT and GPS Backup Technologies Demonstration Report, published in January, specifically stated that a variety of technologies are needed to complement GPS. What is the most cost-efficient in an urban area is not necessarily the most cost-efficient in a rural or maritime area.”

“PNT is a utility used by every American. Having affordable complementary service available to people in rural and urban areas is the height of efficiency. It is unquestionably in the interests of national and economic security. In fact, access to at least one alternative should be free so to encourage adoption and best protect the nation,” she said.

“GPS is now a free service provided by the government, and the government is responsible for making sure that it is reliable. GPS outages would cause harm across a broad range of economic activities, including emergency services, general aviation, pipelines, and the electricity grid,” according to Furchtgott-Roth.

The proposal to repeal NTRSA cites “recent federal analyses” as part of its justification. One of these is likely a report done for the Department of Homeland Security (DHS) by the RAND Corporation. Touted in a press release last month as “new research” and labeled “Published 2021,” the work was actually completed in 2019. DHS representatives have said the delay in publication was needed for review and approval.

Yet the report was the basis for a DHS report to Congress submitted in April 2020. This has caused some to opine that its publication was timed to reinforce OMB’s effort to repeal NTRSA. “You don’t submit reports to Congress based on un-reviewed, un-approved material,” said a retired DHS official. “The timing of its release is clearly deliberate.”

The study, “Analyzing a More Resilient National Positioning, Navigation, and Timing Capability,” takes a cost-benefit approach to the issue. One of its high-level findings is that government investment in a duplicate, GPS-like backup capability is not warranted.

At the same time, it found that government investment in a national timing network, such as the one mandated by the NTRSA, is likely warranted. Saying that a complete backup for all GPS services in all parts of the country is not cost-beneficial, the study says there are some “…federal initiatives that do appear to be cost effective or close to cost effective.” These include “Timing-only backup through fiber/FirstNet, eLoran, or STL [Satelles].”

According to the retired DHS official, this directly contradicts OMB’s assertion that NTRSA should be repealed. “Either they didn’t read the whole thing, or they counted on most people not reading farther than the top-level recommendations,” he said. “And those top recommendations were clearly selected to match OMB’s desired outcome.”

The May 2021 “Report to the President on Communications Resiliency” also runs counter to claims made in the budget proposal. In it, the president’s National Security Telecommunications Advisory Committee (coordinated by DHS) cites the need for GPS alternatives in telecommunications and urges President Biden to fund them. It specifically mentions the need for a national timing architecture, and cites the provisions of NTRSA several times as a step in the right direction.

The industry group Alliance for Telecommunications Solutions also sent letters in May to congressional leaders urging funding for GPS alternatives.

Congress has become increasingly dissatisfied with executive branch actions on resilient PNT over the last decade.

The most recent evidence of this is an extensive and highly critical report of the Department of Defense’s approach to PNT resilience released May 10 by the Government Accountability Office (GAO). Among its recommendations was to not rely on GPS as a primary PNT source but look to more resilient technologies.

While President Trump’s 2020 Executive Order did not make precisely the same recommendation to civil users, it did focus on “responsible use” of PNT and transitioning to using additional, non-GPS dependent sources.

The question still under discussion is how far the government should go to support such a transition.

Seasoned observers regularly comment that Congress has the “power of the purse” and every president’s budget is “dead on arrival” regardless of which party controls the White House.

It seems clear that resilient PNT will be a topic of lively debate between the Congress and the White House, as well as internally on the hill, for the foreseeable future.