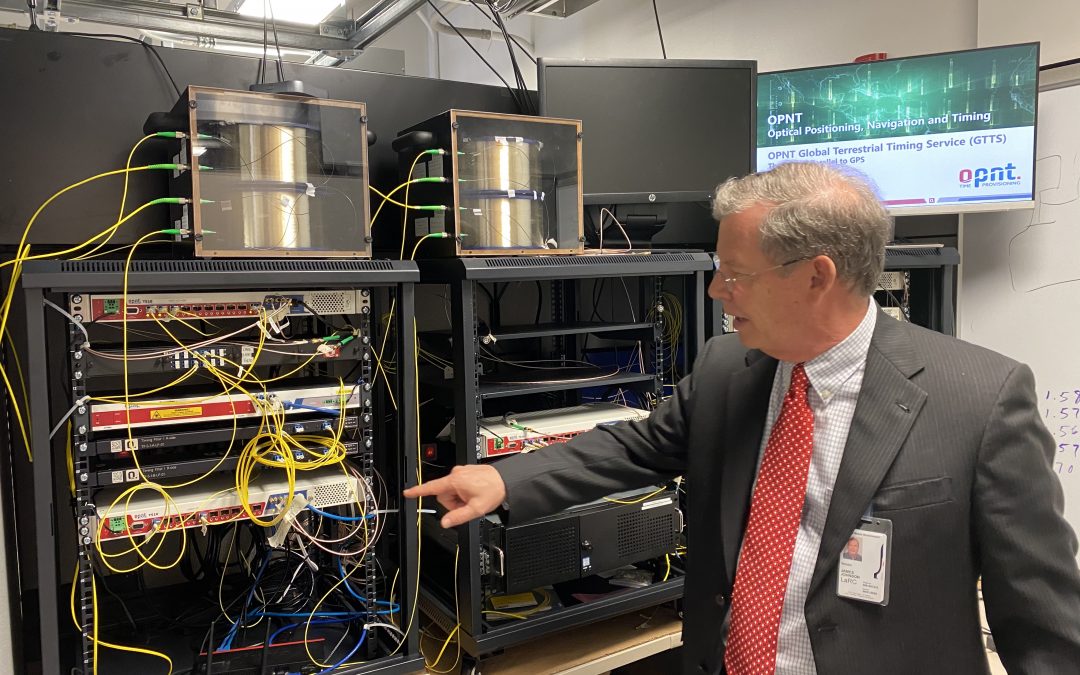 Blog Editor’s Note: The article’s author is President of the RNT Foundation.

In a long-anticipated report issued last week, the Department of Transportation (DOT) outlined the results of its GPS Backup Technology Demonstration project. As officials had previously projected, it called for a system-of-systems approach using multiple complementary technologies.

The report called for an architecture that included signals from space in the L band, terrestrial broadcasts in the Ultra High Frequency (UHF) and Low Frequency (LF) spectra, and a fiber backbone to synchronize and feed precise time to terrestrial transmitters.

The demonstration project and report were mandated by Congress in legislation passed in late 2017 and funded in early 2018. Delays within the administration resulted in the project beginning in early 2019.

Of 21 firms that offered to demonstrate their wares, eleven were selected. They were:

Five of the demonstrations were conducted at Joint Base Cape Cod with the remainder at NASA’s Langley Research Center in Virginia.

Timing demonstrations were assessed for system:

Positioning was evaluated for:

The report also mentions an earlier set of demonstrations done by the Department of Homeland Security (DHS).

In December of 2018 DHS’s Science and Technology Directorate performed the work through the Homeland Security Systems Engineering and Development Institute. The project “…demonstrated a combination of position and timing use cases for dynamic vs. static and indoor vs. outdoor applications, along with a time-transfer use case for critical infrastructure applications.” Systems from Locata Corp, NextNav, and Satelles were evaluated.

The DoT report says that eLoran was not part of the DHS effort because of the lack of transmitters in the area. However, “DHS had previously studied eLORAN performance under a Cooperative Research and Development Agreement (CRADA) with Harris Corporation and UrsaNav and had an understanding of its capabilities.

A report of DHS’ December 2018 work is not publicly available, though DOT says it was used to inform their efforts.

The only publicly available information from DHS about the eLoran CRADA seems to be a 2016 press release. A presentation and other information  is available on the UrsaNav website.

The 437 page DOT report is filled to the brim with detailed information about the project, individual technologies, and demonstration results.

The Executive Summary says that, in addition to the findings from the DHS December 2018 effort (which, as mentioned above, don’t seem to be publicly available), the DOT demonstration had four key findings:

Addressing the needs of critical infrastructure owners and operators, the report concluded the needed “…technologies are LF and UHF terrestrial and L-band satellite broadcasts for PNT functions with supporting fiber optic time services to transmitters/control segments.”

Government officials and industry observers alike have welcomed the report, though it does leave some questions on the table.

“Economic and homeland security are sometimes considered by agencies and Congress as subsets of national security, sometimes not,” according to one analyst. “So, we don’t know if the needs of first responders, delivery services, civil government agencies, and other essential users were ever formally considered. The good news is that the combination of systems identified, if implemented and made available to all, would likely meet the needs of most.”

Other open issues are about implementing the report’s recommendations.

Some have been quick to point out that the demonstrations were to inform the government, not part of a procurement.

“If this was for an acquisition, it would have been done differently,” said one government retiree.  “Rather than having vendors set up and operate the equipment, government evaluators would have been much more hands on. And they would have made every effort to do all the trials at the same location.”

Going forward cost will also an important factor, as mentioned in the report’s key findings. “Depending on who you want to serve and where, the costs different technologies vary by orders of magnitude” said one provider.

Reaction from those involved with the demonstration project has been generally upbeat with praise for DOT’s effort and anticipation of more progress.

Typical were comments from Ganesh Pattabiraman, CEO at NextNav who appreciated the real-world scenarios DOT used in the project. Regarding next steps he said, “We look forward to working with Congress on implementing the report’s recommendations.”