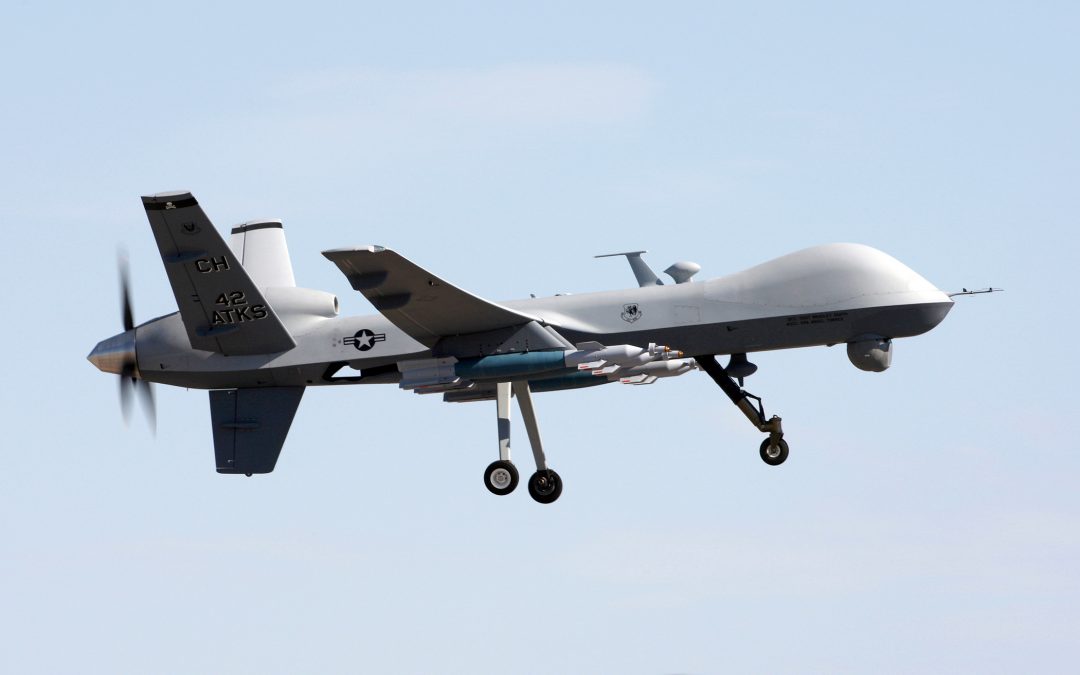 A small aircraft’s encounter with a likely military drone near Edwards Air Force Base resulted in navigation failure, according to a report filed with NASA’s Aviation Safety Reporting System.

The pilot reported, “I saw a DOD drone (inverted V tail) pass overhead approximately 1,000 [feet] above. At the same time, my PFD [primary flight display] indicated that I had a large magnetic variation error, and in turn … indicated that I was now flying to a new way point (TCH VOR) located in Utah, well off my flight plan.”

Later, the navigation system indicated that the aircraft was on its way to a spot in Montana.

Interestingly, the flight plan displayed by another cockpit instrument, the Multi-Function Display, was not affected.

The aircraft had been operating under an Instrument Flight Plan. Federal Aviation Administration rules for light aircraft allow such operation with GPS as the sole navigation sensor.

With the primary flight display not operating properly, the aircraft was no longer able to fly a safe instrument approach to landing. Fortunately, the weather was such that it could proceed and land using Visual Flight Rules.

In the pilot’s words, “Had it not been a VMC [visual meteorological conditions] day allowing me to fly a visual approach, I would have had to [advise Air Traffic Control] – and find a way to land without any reliable approach capability.”

A combination of factors

The general consensus among experts is that this incident was inadvertent and likely arose from a combination of factors. Most significant were that the drone flew above the light aircraft, temporarily blocking some GPS signals, and emitting electromagnetic radiation from one or more of its on-board systems.

It is not possible to say what those systems and radiation may have been. It is unlikely they were intended to interfere with GPS reception, as that would pose serious safety-of-flight concerns in the nearby congested Los Angeles airspace.

GPS signals are infamously easy to disrupt, though. It is probable that the close proximity of the drone resulted in some radiation from its systems “spilling over” into GPS frequencies and causing the problem.

Of greater concern is that the light aircraft’s systems did not quickly reset and recover once the drone had moved off and the interference ceased. Had the aircraft been flying in the clouds or bad weather, the loss of its only radionavigation source could have been quite serious.

While not clear from the report, it is likely that the navigation system only recovered after a complete shutdown and restart. From the report in the NASA database:
“The system has since been checked and is operating correctly, but it seems pretty clear this was some type of interference / jamming arising from the DOD drone. Clearly, this is a significant risk to all aircraft, and because if [sic] occurred within the LA airspace it is a serious threat to safe flights.”

The need to address interference

Shortly before this incident, the International Civil Aviation Organization identified addressing interference with satellite navigation system signals an “urgent priority.” This was in response to concerns from several member countries and organizations citing safety of flight issues. One example cited was the near loss of a passenger aircraft flying in the mountains during a period of GPS disruption.

The October 2019 report of interference from the drone is number ACN 1696794 in the NASA Aviation Safety Reporting System. It can be accessed by searching here.