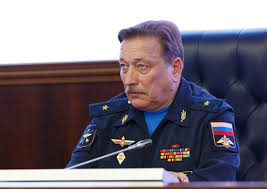 Image: Ministry of Defence of the Russian Federation

Blog Editor’s Note: In October Russia claimed that a US electronic warfare aircraft had taken over drones and caused them to attack a Russian base in Syria. The below report now says the attack was by terrorists. It also points out the rapid adaptability and talent available to non-state actors.

We have bolded some text we thought particularly interesting.

Ministry of Defence of the Russian Federation

Through the night from January 5 to 6 [2018], the Khmeimim air base was attacked by terrorists, who used strike unmanned aerial vehicles (UAVs).

Airspace reconnaissance means detected all air targets at the safe distance from the base.

Seven drones were eliminated by the Pantsyr-S air defence systems, six ones landed at assigned coordinates with the use of electronic warfare hardware.

However, three drones were destroyed by explosion of munitions they carried.

It is to be noted that Russian Defence Ministry has been monitoring the use of all types of weapons and military hardware by insurgents in Syria. Necessary countermeasures have been taken.

It completely refers to the use of unmanned aerial vehicles.

Multilevel systems including means of detection as well as fire and EW engagement have been formed at the Khmeimim airbase and Tartus port in order to counter drones controlled by insurgents.

All these systems allowed repelling the terrorist attack on the night from 5 to 6 of January.

Until recently, insurgents used unmanned aerial vehicles to conduct air reconnaissance. Only isolated cases of using drones as strikes ones were registered.

As a rule, these UAVs were assembled from parts available on the market.

In the middle of 2016, insurgents started using foreign quadcopters for conducting air reconnaissance and delivering strikes.

It is to be stressed that the Russian side registered that insurgents started using drones of a new type and modifications in a few days after the drones had appeared on the market in different countries.

Insurgents have used such unmanned aerial vehicles to deliver strikes on objects of the Russian Armed Forces for the first time.

Specialists of the Russian Defence Ministry have examined constructions and capabilities of the drones.

Construction of these drones takes significant time period and special knowledge of aerodynamics and radioelectronics.

Handicraft industry of these drones is possible if one had assembly schemes and necessary components, which had been tested properly.

In order to produce these drones, such components as engine, servo units, and electrical batteries are could be bought on the market.

However, assembly and use of these components in the joint system are a complicated engineer task demanding special training, scientific knowledge, and practical experience of producing these aircraft.

These are some examples.

Internal combustion engines used in grass-cutters and motorized bicycles were mounted on the drones.

As everybody knows, nobody could mount them on the UAVs without appropriate modification.

Moreover, special software is required for using fire means of the drones.

Insurgents needed to receive sharp coordinates of targets and take into account numerous parameters as altitude, flight speed as well as wind direction and speed in order to reach necessary strike effectiveness.

Examination shows that radioelectonic equipment, which had been mounted on the drones, provided automated and programmed in advance flight of the drones and drop of explosive devices as well as safety of control systems from electronic countermeasures.

Moreover, for example, pre-programmed coordinates are more accurate than those in the Internet.

In order to receive needed flight-tactic characteristics of the drone, even an improvised one, it is necessary to conduct calculations and flight tests.

Organization of combat use of drones demands respective training and experience.

Massed launch of drones targeting Russian military objects in Syria was triggered from one place in a short period of time.

The slides show decoded data from captured drones on their coded and real flight routes and their    assigned discharge points.

At the same time, one of the drones was equipped a videocamera designed for control and fire adjustment.

There for when preparing for the attack, it was necessary to perform required engineering and navigational calculations for effective application of a group of drones.

One should pay attention to munitions carried by the drones.

These are 400g improvised explosive devices with fragmentations (small metal balls). The effective area of such munitions is up to 50m.

Preliminary researches have showed that the PETN, which is more powerful than RDX, was used as explosive basis in munitions.

The PETN is produces by a number of countries, including Ukraine at the Shostkinsky Chemical Plant. This explosive material cannot be produced in an improvised manner or extracted from other munitions.

The results of analysing the drones and their application suggest the following conclusions:

First of all, it is impossible to develop such drones in an improvised manner. They were developed and operated by experts with special skills acquired in countries that produce and apply systems with UAVs.

Secondly, there is a real threat that terrorists can use drones for their attacks worldwide. This threat is to be eliminated by appropriate measures.

The Russian Defence Ministry pointed out that one should not confuse basic construction of attack drones demonstrated at the briefing with engineering and technical solutions applied in developing.

The fact that terrorists have received assembly technology and programming technology is the evidence that this threat stretches far beyond the Syrian borders.

Such lethal drones can be applied by terrorists in any country, targeting not only military objects.

To eliminate such threats, it is important to start addressing it today, and organize cooperation of all interested sides at international level.