Here is the second of the three case studies:

We were made aware of a potential unintentional L2 interference device and took it to Cross Iron Mills mall, north of Calgary, Canada, to investigate. FIGURE 10 shows a map of the area. 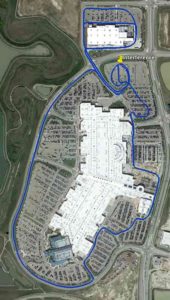 FIGURE 10. Map of the test area showing the location of the interference source.

The interference device was a transmitter to send video from a drone to a monitor, broadcasting at 1.2 GHz with 800 milliwatts. It was purchased online with no warnings about potential impacts it may have on other systems or devices. As recreational drones (and their electronics) become more popular, unintentional jammers and interference sources could become commonplace. We have no continuous monitoring and enforcement for short-range and short-duration unintentional jammers such as this one.

Although many commercial-grade receivers, such as ones common in cell phone and GPS watches, were unaffected because they only operate at L1, the box the device came in also indicates that there is a 1.5-GHz model capable of broadcasting at 2 watts. With 2 watts at 1.5 GHz, GPS L1 would be significantly jammed. This emphasizes the need for interference detection and mitigation. Nothing is stopping recreational hobbyists from accidentally jamming a significant number of users and services.

For example, on the north end of the small building, shown on the right side of the figure, the observed interference power drops to almost zero despite being relatively close to the interference source. The large variations in power throughout the southern loop may be due to partial obstructions from parked cars or outcrops of the building. These physical obstructions cause larger decreases in received power than simply moving the antennas away from each other.

Since the interference was only broadcasting on L2, a position is still available through the other GNSS frequencies. The GPS receiver had difficulty tracking GPS L2 signals because of the interference.

This shows how a simple device can inadvertently be harmful. Anyone could have purchased this device to transmit video from their recreational drone. Since this device only broadcasts on L2, the GPS of the drone and many nearby devices would have been unaffected, while almost completely jamming and disrupting any dual-frequency receivers nearby.

FIGURE 13 shows the interference goodness-of-fit map from the real data test. The map shows the correct trend, but the peak of the map does not include the actual location of the interference transmitter. This is due to inaccuracies in the power attenuation model. For example, a significant shift to the south is due to the rapid decrease in power when moving behind the north building.

When only the southern dataset is considered, we get a more accurate map, one not impacted by the northern building. This is because the attenuation model does not account for obstructions. The performance of this kind of model could be significantly improved with a model that includes the topography and buildings.