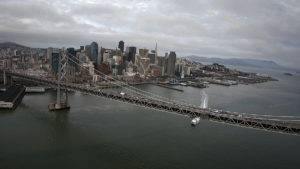 Blog Editor’s Notes: The following web post and TV broadcast sounds the alarm about our over-dependence on GPS and the potential consequences of disruptions. Regular readers of this blog will see that, unfortunately, while the concerns expressed are well founded, some things in the story are over-stated.*

This often happens when governments deny or fail to address serious threats to the public.

The National PNT Advisory Board issued a report in 2010 warning about GPS over-dependence and the consequences of disruptions. The Department of Homeland Security did the same thing in a 2011 National Risk Estimate. Yet, despite these and subsequent reports urging prompt action, two administrations failed to act.

Congress is set to compel action by the current administration. But until a single responsible federal leader addresses this issue publicly and directly, we can expect to see greater and greater public concern, and along with it more less-than-precise-statements.

by Kiet Do and Molly McCrea

SAN FRANCISCO (KPIX) — Imagine an attack in the Bay Area that shuts down the bridges and BART; where the ATMs and your credit cards don’t work and planes, trains and Uber are no longer available.

The bad guy is a hacker at an undisclosed location and his target: The U.S. GPS satellite system.

Garamendi represents California’s 3rd District and serves on the Armed Services and Transportation & Infrastructure committees. He is the ranking member of the Coast Guard and Maritime Transportation subcommittee.

He said unknown forces are interfering with GPS and it’s a dangerous game.

“Yes it can happen and it has happened. There are plenty of incidences.”

Garamendi recounted how, last year, a GPS spoofing attack placed 20 ships in the Black Sea at the wrong location.

“The navigation system will say they are in the middle of the airport in Sochi,” explained Garamendi.

Russia is suspected but there is no proof.

In another case, a trucker used a GPS jammer he bought on the black market to evade his boss and ended up crippling Newark International Airport in New Jersey as he drove nearby.

“Knocked out the GPS system — the planes couldn’t land! They had absolutely no idea how they were going to make that airport operate,” exclaimed Garamendi.

An official U.S. Naval Investigative Report issued in November, 2017, points away from a deliberate GPS attack but Garamendi is not convinced and he is not alone.

Winfree spoke on a panel convened by the Space Foundation and attended by space experts, entrepreneurs, venture capitalists and Silicon Valley startups at a hotel in San Francisco.

Also on the panel: Andrew Bach, the Senior Technical Advisor for PICO, Kathryn Condello, who is the director of National Security/Emergency Preparedness for CenturyLink, and Caitlin Durkovich who is Director of Toffler Associates.

They agreed that, if the U.S. GPS Satellite System goes down, we’re all in a heap of trouble.

* One notable example of overstatement is that a GPS disruption caused Newark airport be unable to land airplanes. The airport’s GPS-enabled landing systems have been impacted by jamming twice. In both cases planes were still able to land using other systems.