Report Narrative: “[Wireless internet service provider] has 122 GPS receivers located in eastern Kansas and western Missouri used to synchronize transmissions in a radio communications network.  These receivers and their antennas are generally located on towers and grain elevators, typically 100 to 600 feet AGL.  At about 17:54 CDT on [date] we started receiving alarms on 12 of the receivers indicating they were tracking 0 satellites.  Those receivers were in 9 different locations, roughly in an area stretching from El Dorado KS to Lehigh KS.  The receivers tracked 0 satellites until 18:15 CDT, when service became intermittent.  All 12 receivers could finally track at least one satellite by 19:29 CDT.  In reviewing data from all 122 receivers, we noticed some receivers as far as 150 miles away from the affected area saw the number of satellites tracked drop to as low as 1 for a short period.”

We spoke with the engineer at the wireless company about this incident. He told us that their services were off air for the duration of the disruption. The company had one receiver with a “filtered antenna” that did not fail, though they have since stopped using that model because of other issues.  The engineer reported “If the incident had not self-corrected after an hour or so, we don’t know what we would have done.”

The Coast Guard checked with the company nine days later to see if the problem had been resolved. A major wireless telecom company also contacted the reporting engineer seeking a better understanding of what happened.

No source for the disruption was ever identified.

Information for this post was drawn from a report received by the U.S. Coast Guard Navigation Center.

Map of receiver sites most impacted 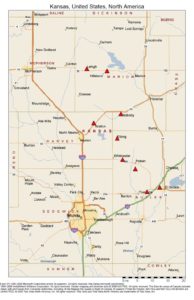