Editor’s Note: The below article from Pravda.ru says it was sparked by US and British media reports “…that Russia tested an unknown cyber weapon in the Black Sea in June.” It goes on to say “Western publications are full of reports about Russia’s new cyber weapon that allegedly made a US Navy ship run aground in the waters of the Black Sea…”

The ships in June were all merchant vessels, and none went aground. A US Navy ship, USS Taylor, did run aground near a Turkish port on the Black Sea, but that was in 2014.

This report is the only one we have found that has connected USS Taylor’s grounding with a possible cyberattack. It is possible that the reporter improperly conflated the two events, though the interviewee did not correct her. 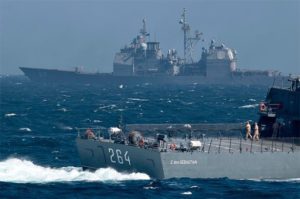 What weapons Russia is going to have in the 21st century

The issue of cyber security and cyber weapons has been talked about a lot recently. US and British media reported that Russia tested an unknown cyber weapon in the Black Sea in June. The weapon, as it was said, did not let the enemy track the course of warships, disrupted the work of navigators and provided incorrect data on vessels in the vicinity.

In order to find out what secret weapon Russia is developing with the use of new cyber-technologies, Pravda.Ru interviewed Alexei Leonkov, military expert, expert in the field of the use of Military Space Forces.

“Western publications are full of reports about Russia’s new cyber weapon that allegedly made a US Navy ship run aground in the waters of the Black Sea after the ship had lost its course. Other sources say that it was not a cyber weapon, but an ordinary “jammer” that operates near secret objects.”

“The vulnerability of the GPS system has been much talked about recently. Not only can one intercept navigation, but also give incorrect coordinates and confuse the enemy. For example, one can recall the story when Iran could confuse coordinates of a US drone aircraft to make the vehicle land on the territory of Iran, having intercepted the control over the UAV.”

“Are there any means that can affect the work of onboard equipment?”

“Of course, there are ground station of coastal defence. There are long-range electronic warfare complexes that may cause problems for foreign vessels nearby.”

Editor’s Post Script: Pravda.ru is an on-line tabloid that mixes sensational and serious news items, not to be confused with the old communist party official news outlet “Pravda.” Alexi Leonkov has been quoted as a defense expert by numerous media outlets and is an editor of “Arsenal of  the Fatherland.”