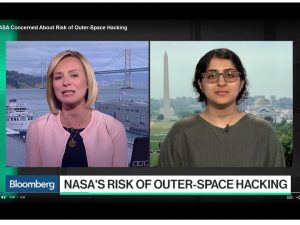 Blog Editor’s Note: Several interesting things about the below article:

NASA scientists glean valuable data about powerful space explosions and the energy of black holes from their Swift and Fermi satellites. The projects were supposed to last a few years. Instead, they’ve survived for more than a decade.

That’s great for researchers but a challenge for Jeanette Hanna-Ruiz because of the projects’ aging computer operating systems. As the space agency’s chief information security officer, she has to secure the data sent to and from planet Earth against cyberattacks.

“It’s a matter of time before someone hacks into something in space,” Hanna-Ruiz, 44, said in an interview at her office in Washington. “We see ourselves as a very attractive target.

Cybersecurity at the National Aeronautics and Space Administration extends from maintaining email systems at the agency’s Washington headquarters to guarding U.S. networks in Russia, where Americans serve on crews working with the International Space Station. The agency also has to protect huge amounts of in-house scientific data and the control systems at its 20 research centers, laboratories and other facilities in the U.S.