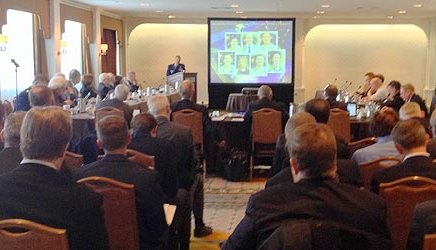 At the 15th meeting of the National PNT Advisory Board last week in Annapolis, the board’s vice chair and generally recognized “father of GPS”, Dr. Brad Parkinson, made the case for using a combination of GPS, eLoran and inertial systems in order to achieve the nation’s goal of “Assured PNT.”

Achieving a “Grand Synergy” for positioning and navigation, Parkinson said, could involve leveraging the very different but complementary characteristics of GPS/GNSS, eLoran and inertial navigation units. Integrating all three systems would ensure that a user could locate themselves and navigate through most all conceivable disruption scenarios.

Parkinson admitted that his presentation neglected to address the need many critical systems have for precise synchronized time. Members of the board observed that reports have shown eLoran to be an excellent source of wireless precise time. Also that a test/demonstration of  time via eLoran was set to begin later this month under a DHS CRADA with Harris and UrsaNav. This test/demonstration is part of a larger US government effort described in the 2014 Federal Radionavigation Plan to improve the nation’s PNT Architecture.

This is not the first time that Parkinson and the PNT Advisory Board have pointed out the need for Assured (multiple source) PNT to help ensure the nation’s safety, security and economic prosperity.

We hope that the administration will continue to value the board’s input, and will seriously consider and take action on all its recommendations.