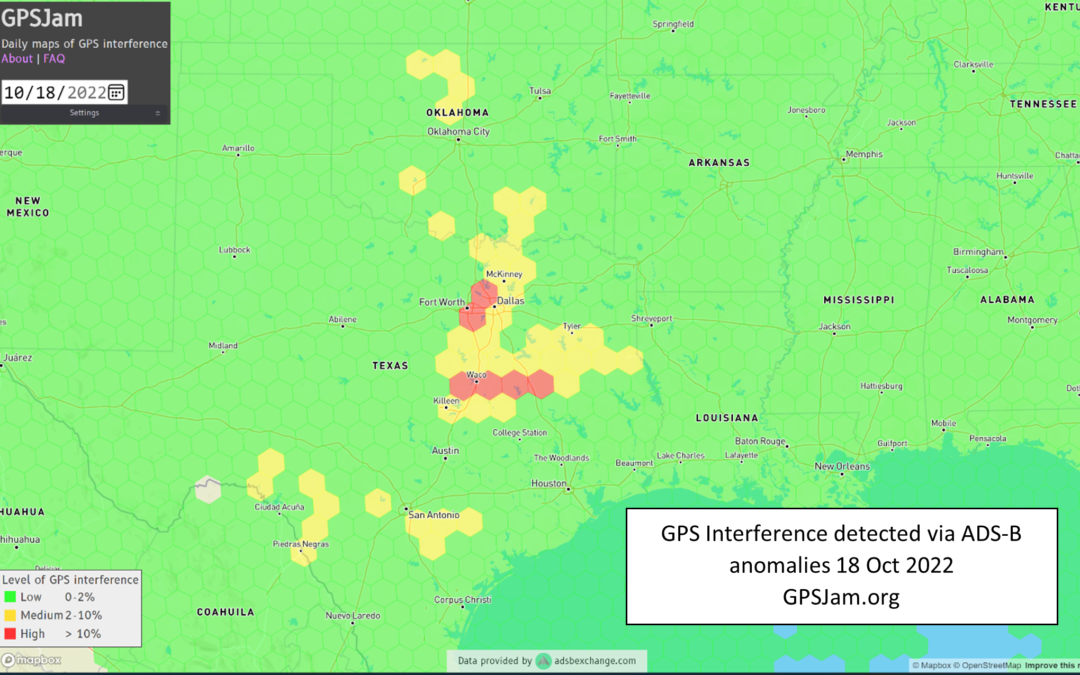 Blog Editor’s Note: More info on the disruption at Dallas this week.

American and Southwest Airlines said their operations were unaffected. Sounds like corporate-speak since “less efficient routes” were used and we know there were at least some departure delays:

Also of interest, the southern red section on the graphic showing interference is very near, if not on top of, Ft Hood, the nation’s second largest military installation. That said, the below article asserts “…fine-grained tracking of the interference suggested that military operations—the most common source of unintentional interference—weren’t playing a role.” We have asked the reporter for more information about the “fine grained tracking.”

And check out the nifty time lapse graphic John Wiseman of GPSJam.org posted on Twitter.

Wouldn’t it be nice if the federal government had such a capability and was always on the lookout for such things?

DALLAS, WE HAVE A PROBLEM —

Episode lasting almost 2 days prompted the closure of a runway at Dallas airport.

The Federal Aviation Administration is investigating the cause of mysterious GPS interference that, over the past few days, has closed one runway at the Dallas-Fort Worth International Airport and prompted some aircraft in the region to be rerouted to areas where signals were working properly.

The interference first came to light on Monday afternoon when the FAA issued an advisory over ATIS (Automatic Terminal Information Service). It warned flight personnel and air traffic controllers of GPS interference over a 40-mile swath of airspace near the Dallas-Fort Worth airport. The advisory read in part: “ATTN ALL AIRCRAFT. GPS REPORTED UNRELIABLE WITHIN 40 NM OF DFW.”