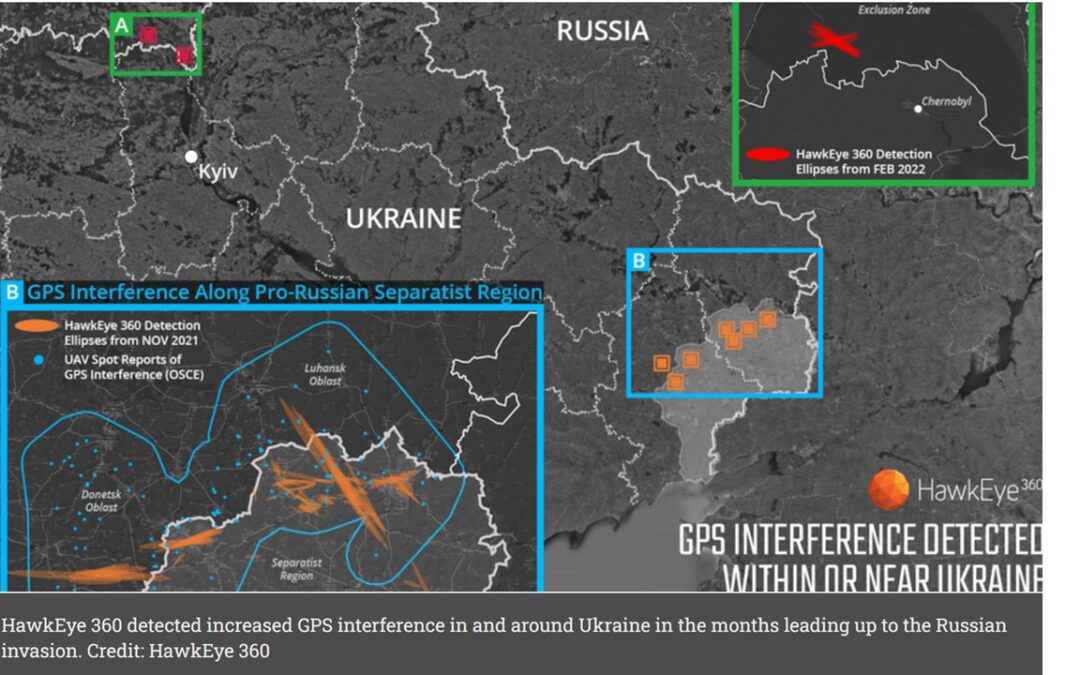 Pretty easy guess that jamming GPS would be a part of the Russian invasion. The question really is about scope. It seems to be localized, so far.

And, as the second article points out, “Thank you for that, Mr. Putin. It allows NATO to do things next door much more easily than otherwise.”  It also points out that Russia may well jam more broadly later.

As far as we know, the Pentagon does not have a program of persistent monitoring for GPS disruption around the globe. The USCG does receive reports and posts them. DOD is looking into using commercially available information (we are guessing AIS and ADS-B) to identify such disruptions. But those two efforts seem to be the extent of it.

Updated March 4 at 10:40 am Eastern time with comments from HawkEye 360 CEO John Serafini.

HawkEye 360 proved that point in a March 4 news release on GPS interference in and around Ukraine over the last four months. Prior to Russia’s Feb. 24 invasion of Ukraine, the Herndon, Virginia-based geospatial analytics company noted continual and increasing GPS interference near Ukraine.

“This is a modern war, with the Russians leveraging the latest in electronic warfare technologies,” HawkEye 360 CEO John Serafini told SpaceNews by email. “This is representative of the tactics that Russian troops are deploying to degrade the effectiveness of space-based assets, such as the United States Global Positioning System. GPS jamming is one facet that we are seeing evidence through the use of our signal detection constellation and processing capabilities.”

WASHINGTON: Localized Russian jamming of GPS signals in Ukraine has been detected by US forces in the region, but so far has not interfered with US support operations, according to Pentagon officials.

One military source told Breaking Defense that jamming has been detected as far out as the Black Sea by US reconnaissance aircraft, but the source stressed it hasn’t had any impact on mission capability.

Similarly, when asked about Russian jamming, a US Space Command spokesperson said, “There are no impacts to U.S. and Allied forces in Europe at this time.”

That said, a senior defense official told reporters today that the US suspects Russia has been holding back in utilizing its vast toolset for electronic warfare so far.