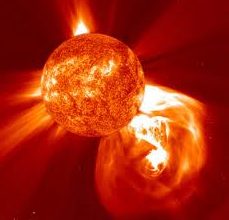 An interesting phenomena, but not something that we could expect to impact GNSS.

A good reminder, though, that space is a dangerous place.