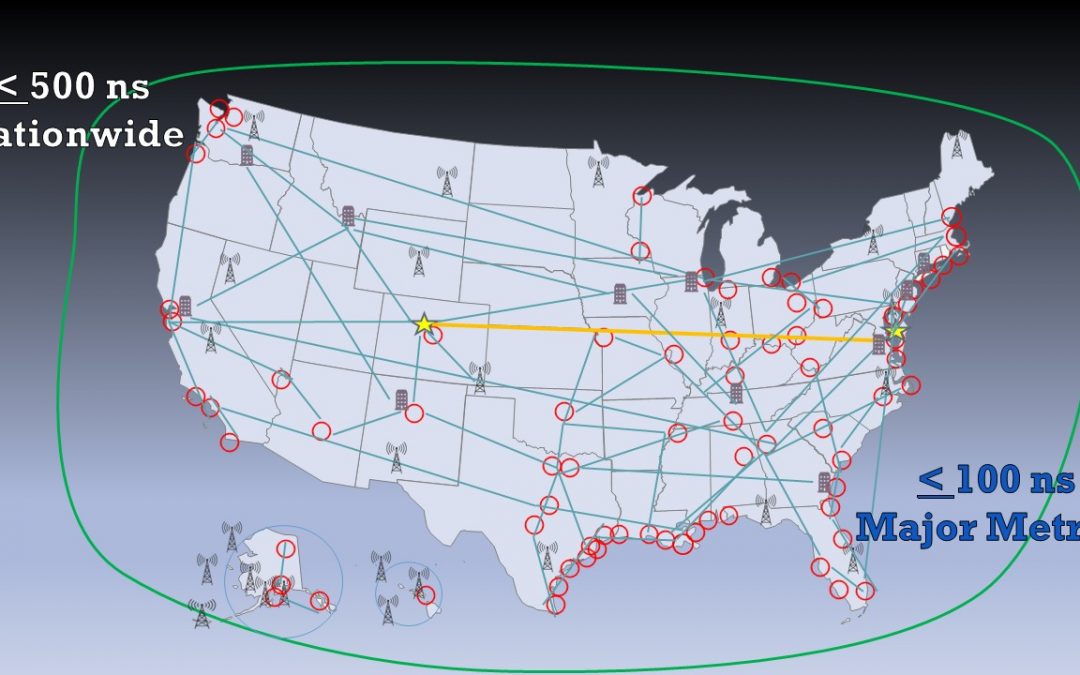 A National Resilient Timing Architecture should include delivery by fiber and RF along with space-based, according to the RNT Foundation.  Image: RNT Foundation

Blog Editor’s Note: The author is president of the RNT Foundation. Special thanks to Dr. Pat Diamond and Dr. Marc Weiss for their help on this project.

The Resilient Navigation and Timing (RNT) Foundation has published a white paper proposing attributes for a government Request for Proposal (RFP) to acquire timing services.

Timing services, most of which are now sourced directly or indirectly from GPS, are essential for myriads of network, transportation, financial, industrial, and other applications. The National Timing Resilience and Security Act of 2018 (NTRSA) requires establishment of one or more systems to serve as alternatives and back up GPS timing.

The RNT Foundation’s October 2020 white paper discusses how a national timing architecture fulfilling the requirements of NTRSA could be established relatively easily and inexpensively. It proposes that, rather than building its own system, the government contract for services with commercial providers.

The new white paper outlines some of the requirements and evaluation criteria the government might use when acquiring timing services.

The paper postulates that the goal of such a procurement should be to establish a federal timing “backbone.” This would fulfill the requirements of NTRSA, which recognizes that timing is critical for many applications and is also the basis for most electronic positioning and navigation systems.

Establishing this backbone will provide users with an alternative and a safety net for GPS disruptions, and at other times enable more resilient and reliable services. As a backbone, it would provide basic, foundational services upon which others would be able to build. The new services would be expected to:

Regarding this last point, the paper notes that mobile devices must know their location before they can make use of timing signals. Thus, the selected system or combination of systems also will have to provide GPS-independent location information at a basic level to mobile users.

Successful proposals, the paper envisions, will need to meet a number of requirements including

Fortunately for the government, numerous systems and companies are already able to provide the needed services. Deciding which to select will likely be a significant effort. Some of the evaluation criteria suggested by the RNT Foundation white paper are:

Annual Cost – While cost will not be the only consideration in this acquisition, the government always has a responsibility to taxpayers to weigh it as an important factor.

Infrastructure Required Per Unit of Coverage Area – This has been cited by the Department of Transportation as a very important consideration. Not only does the amount of infrastructure affect cost, but it also has implications for environmental and community impacts.

Spectrum – Signal disruption by in-band and out-of-band transmissions has been a significant issue for GPS. New PNT wireless and radio-frequency services should pose as few spectrum concerns as possible. Spectrum band reservations, licenses, pre-allocated bands, other bands and adjacent band uses will all be given consideration.

Penetration – While the government may not list this as a requirement, the ability of a service to reach underwater, underground and indoor locations will likely be desirable and part of proposal evaluation.

Resilience – The vulnerability of GPS signals to disruption will undoubtedly make the resilience of potential backup and complementary systems a major issue. The RNT Foundation paper discusses two kinds of resilience – operational and recovery.

Operational resilience is defined as “the ability of a system, combination of systems, or service to resist disruption (e.g.: jamming, spoofing, physical damage negatively impacting service).” One measure of resilience might be the energy needed to disrupt signals.

Recovery resilience is described as “The speed and ease with which a service can return to normal operation” after a disruption.

Cybersecurity – Similarly, cybersecurity is seen as having two components. The first is network security, defined as the degree to which systems are isolated from or connected to networks. Second is signal security, and is how well signals can be protected from infiltration and imitation.

Since the “National Resilient Timing Architecture” white paper was issued in 2020, calls for GPS alternatives have intensified, and the white paper itself has received an important endorsement.

On May 7, the telecommunications industry standards group Alliance for Telecommunications Industry Solutions (ATIS) vigorously supported federal funding for GPS alternatives. In letters to leaders in both houses of Congress, ATIS cited “the urgent need for funding the deployment and adoption of Alternative Positioning, Navigation, and Timing (PNT) Systems in U.S. critical infrastructure, including the U.S. telecom industry.”

The need for federal support for timing and positioning backups for GPS was also supported by a two-year old study released by RAND Corporation in May. While the paper went to great lengths to argue against a duplicate GPS-like capability (something no one has supported to the best of our knowledge), it quietly suggested federal support for both a national timing system and location services to serve E-911 systems.

Numerous recent media releases from U.S. Space Force have revealed serious military threats to GPS and other space-based systems. A variety of killer-satellites, lasers and other weapons have turned space from a sanctuary into a potential battle ground. While not specifically calling for alternatives to GPS, the Space Force announcements have made it clear the nation needs to “get the bullseye off GPS.” Establishing at least one terrestrial alternative system similar to those operated by our adversaries will make U.S. satellites and signals much less attractive targets, according to Greg Winfree, former assistant secretary at the U.S. Department of Transportation.

Federal funding for improving national timing was specifically supported by a group of CEOs and senior executives from major telecom companies. Acting as the National Security Telecommunications Advisory Committee (NSTAC), the group’s May report to President Biden discussed GPS vulnerabilities and threats, and urged establishment of a capability

“…similar to that reflected in the Resilient Navigation and Timing Foundation’s paper entitled A Resilient National Timing Architecture. Further, to enhance the ability of commercial entities to afford leveraging this architecture, the Administration should appropriate sufficient funds to lay the foundation for creating this timing architecture, with the Federal Government being the first customer for what will ultimately become a resilient, interconnected network for PNT delivery.”

Dana Goward is president of the Resilient Navigation and Timing (RNT) Foundation.