George Mason University has revised a briefing paper on positioning, navigation and timing (PNT) in response to concerns about its accuracy.

The university’s National Security Institute “NSI Backgrounder — Beyond GPS: The Frontier of Positioning, Navigation, and Timing Services” was first issued on Dec. 2. Some staff on Capitol Hill and members of industry soon had concerns about several of its assertions. 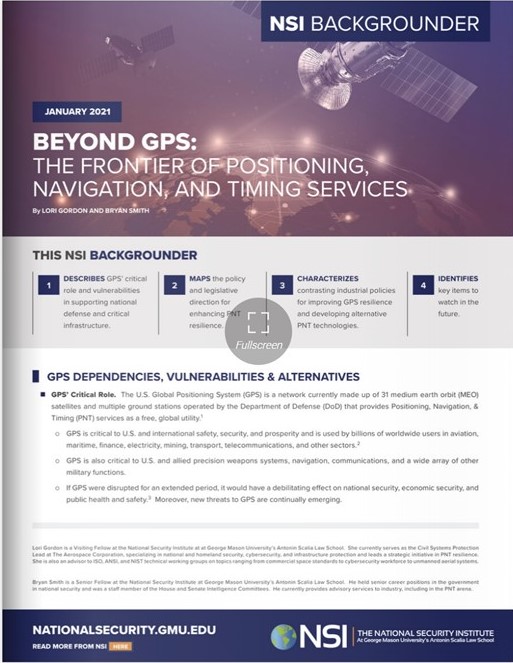 Responding to letters from industry, National Security Institute (NSI) Executive Director and Professor Jamil Jaffer said he determined that three of the issues raised, while not fatal to the document, warranted clarification.

ELoran callout. The first was a statement in the backgrounder that the National Timing Resilience and Security Act (NTRSA) “specifies 13 technical requirements for a GPS backup, which essentially define the eLoran system.”

This was a concern to some on the hill as Congress is generally reluctant to specify solutions. Legislators prefer to specify outcomes and then defer to the executive branch on how to make them happen.

Members of industry pointed out that government systems like WWVB and the low-frequency portion of DARPA’s STOIC program, as well as commercial systems like NextNav and Locata, could meet or be adapted to meet the NTRSA requirement.

The revised backgrounder says the NTRSA “specifies 13 mainly technical requirements for a GPS back-up, which align closely with the capabilities of the eLoran system. Other systems may meet the Act’s requirements to varying degrees.”

Multiple technologies. The revised backgrounder also corrects a statement that the NTRSA requires the Department of Transportation to establish an eLoran system. It now says “a system that complies with the Act, and DOT may pursue multiple technologies in implementing the Act.”

Department officials had previously said they were taking a system-of-systems approach and expected to employ multiple technologies. Subsequently, a DOT report was released that documents the need for several diverse systems. It lists transmissions using low frequency (eLoran, STOIC), ultra high frequency (NextNav, Locata) and L-band from space (GPS, Satelles). It also says the terrestrial transmitters should be interconnected by fiber.

Members of industry also expressed concern that one of the authors of the document serves on the advisory board for Satelles Inc. and that this was not disclosed in the paper. The backgrounder appeared on the Satelles website the same day it was published.

The university concluded that such disclosure was not necessary as the paper said the author “provides advisory services to industry, including in the PNT area.” At the author’s request, though, his profile on NSI’s webpage will be updated to show his relationship with Satelles.