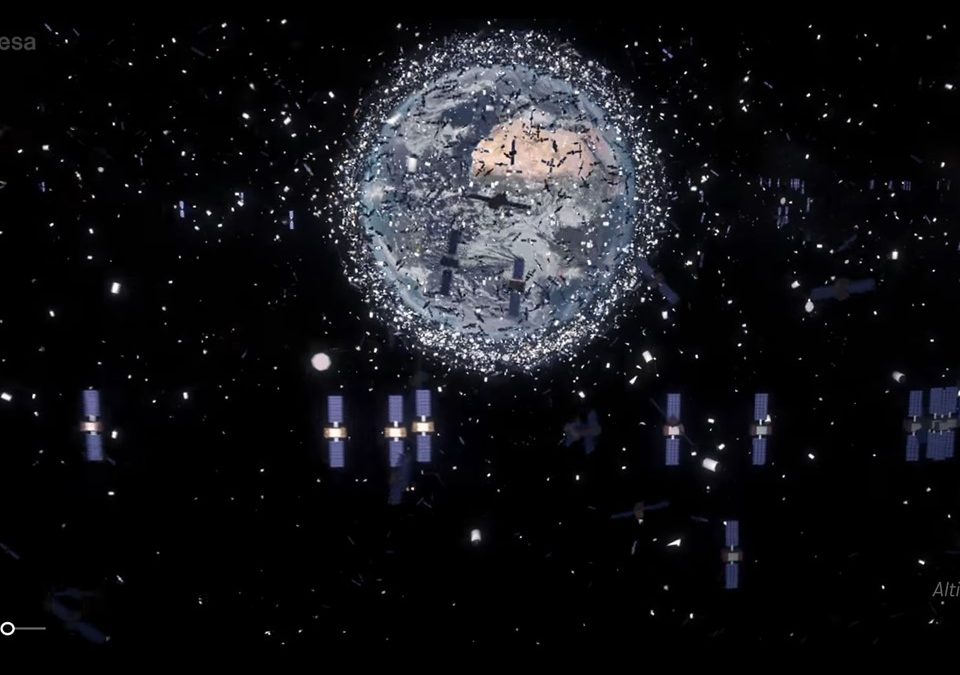 “LEO is an orbital space junk yard. There are millions of pieces of space junk flying in LEO. Most orbital debris comprises human-generated objects, such as pieces of space craft, tiny flecks of paint from a spacecraft, parts of rockets, satellites that are no longer working, or explosions of objects in orbit flying around in space at high speeds.

Most “space junk” is moving very fast and can reach speeds of 18,000 miles per hour, almost seven times faster than a bullet. Due to the rate of speed and volume of debris in LEO, current and future space-based services, explorations, and operations pose a safety risk to people and property in space and on Earth.” – NASA Headquarters Library

Some estimates have over 100,000,000 objects in Low Earth Orbit (LEO) large enough and moving fast enough to damage satellites and other objects. Such collisions create more debris, which then creates more opportunities for collisions… You get the idea.

It is called the Kessler Syndrome and was featured in the film “Gravity” with Sandra Bullock and George Clooney. In the film, a Kessler event takes out the International Space Station. Spoiler alert, Clooney eventually dies and Bullock barely makes it back to Earth.

Some see a slower but developing Kessler Event happening even now.

Debris was first blamed for damage to a satellite in 1981. Reports have continued since. These have include multiple instances of damage to the International Space Station, space shuttles, as well as satellites. We were unable to find an authoritative compilation of these events (Dear Readers, please send if you know of one), but it is a sure bet they are getting more, rather than less, frequent.

Space, especially LEO space, is suffering from The Tragedy of the Commons. Much like the world’s oceans, cyberspace, and fresh air, many use and degrade it for their own profit, but few (if any) take care of and preserve it. Short term greed and a disregard for the common good – perhaps two sides of the same coin – override the long term interests of all.

Here are some short videos on the problem that might be of interest. The most pessimistic envisions humanity trapped on Earth by a LEO layer of debris too thick to even risk flying through.

Eyes on the Sky – University of Texas – A UT space video that does not feature Todd Humphreys, for some reason.

Space Debris – A journey to Earth – by the European Space Agency (ESA). ESA regularly holds conferences on this subject.

The End of Space – by Kurzgesagt a German educational animation studio.

Note: The risk to GPS/GNSS satellites at MEO is much less because there is, probably, much less debris. The only known case of MEO pollution was in 1963 when the U.S. Air Force deployed 480 copper needles for Project West Ford, an attempt to create an artificial ionosphere. NASA believes most of the needles have de-orbited by now.

All of this is not to say there aren’t efforts to restore and preserve LEO. ESA plans to have a space debris collector launched in 2025. And there are international agreements about the need for future satellites to automatically deorbit at the end of their useful lives. This is essential – tens of thousands new satellites are planned for LEO in the next couple of years.

Yet Russia and China continue to practice destroying satellites in space. And most of the existing debris, including the millions of lethal bits too small to be tracked, aren’t going away anytime soon.

One wonders if efforts to make the problem better will ever be able to get ahead of natural and human effects that steadily make it worse.

Perhaps one of the things we should do is ensure every service from space is also provided independently from the ground. That way, regardless of a Kessler Event, Carrington-like solar flare, or some other mishap to one or more space-based services, we won’t be caught unprepared.

It is possible to see the future sometimes. You just have to be brave enough to not avert your eyes.