No silver bullet for US PNT: Many sources needed – GPS World

Blog Editor’s Note: The author of this article is the RNTF president.

No silver bullet for US PNT: Many sources needed

“We cannot have GPS signals be a single point of failure for transportation and other critical infrastructure sectors. More safety applications will depend on PNT in the future. Public confidence in these will be critical.

“People will not be comfortable getting into an automated vehicle or with platooning driverless trucks heading down the highway if they think that their invisible hand is not reliable and that their GPS might be spoofed.

“Getting public adoption of other PNT capabilities — space-based, terrestrial, and self-contained — integrated with GPS technology will be critical to the success of any such system.”

A Single Point of Failure

The Department of Transportation (DOT) is responsible for leading civil positioning, navigation, and timing (PNT) issues for the United States. At the moment, the U.S. GPS provides the vast majority of PNT services in the U.S. and around the world. Yet, like all space-based systems, its signals are weak and very vulnerable to interference.

A recent example of how dangerous that can be in automated transportation systems was revealed recently in an accident report released by the British government. Interference from an unknown source caused a 15.5 kg drone to get away from its operator and crash. Fortunately, no one was hurt. The report cited analysis showing that such a weight could have easily killed someone on the ground.

Even more concerning, GPS signal characteristics are well known and therefore easy to imitate. Thousands of cases of “spoofing” have been documented with government and malicious actors causing receivers to report they are far from their actual location. In the worst cases, this can cause accidents or enable criminal acts.

One result of all of this is the President of the United States issuing an Executive Order encouraging “responsible use” of PNT systems. It also directs steps to encourage development and adoption of alternative systems. This includes a White House-level plan for research and development of non-Global Navigation Satellite System (GNSS) PNT.

In Europe the European Union (EU) has warned that space based PNT alone is insufficient for “…critical applications requiring continuous availability and fail-safe operations.” The EU has also established a monitoring system to detect sources of GNSS interference, and the European Space Agency (ESA) has established an on-going program funding study of both space and terrestrial alternate PNT systems.

The ultimate solution, though, according to senior government officials, will be development and use of many diverse PNT systems working together to ensure users have what they need when and where they need it. 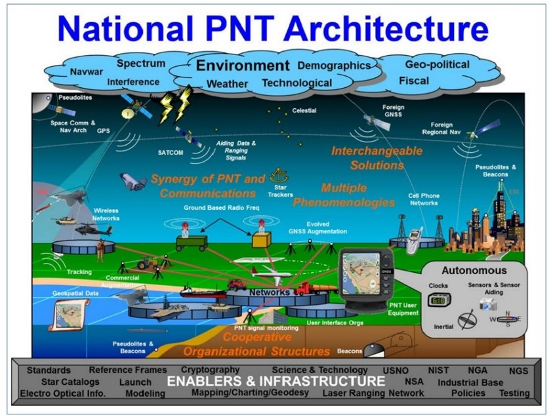 The National PNT Architecture, jointly developed by the US departments of Defense and Transportation, envisions a multitude of PNT sources ranging from GNSS provided by national governments, to inertial and clock suites acquired by users as needed.

“Many people are fond of talking about a GPS backup,” said one administration official.

The idea that multiple redundancies are required for an essential function as long been a core principle of systems engineering. This is clearly foundational in the National PNT Architecture.

It is also a feature in more recent documents.

One example is the U.S. Department of Defense’s (DoD) PNT strategy publicly released in August of last year. It envisions use of a multitude of systems as a way of “Ensuring a U.S. Military PNT Advantage.” 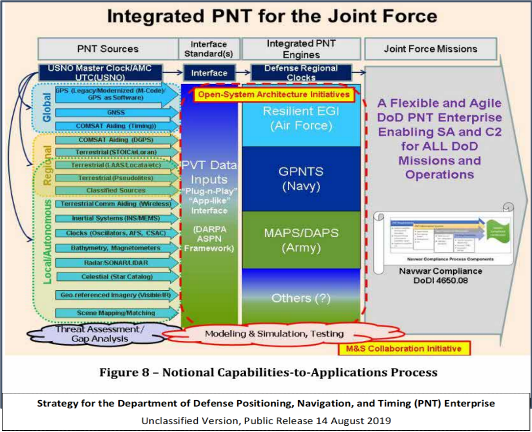 It categorizes these in three layers. A global layer of GNSS and other satellites, a regional layer that includes STOIC and eLoran, and a local/autonomous layer populated by inertial, clock, lidar, radar, scene matching and beacon-based systems.

Another project taking the architecture approach is described in detail by the recently completed MarRINav report. Sponsored by the European Space Agency, it analyzed the PNT needs of maritime commerce in the United Kingdom.

The project concluded that a “hybrid approach” using GNSS, eLoran, and the short-range R-mode VDES would be the best and least expensive combination for maritime. It also recommended a local navigation system such as Locata for port cargo operations. The study found that such a combination of systems would also benefit other transportation and infrastructure sectors.

Yet identifying solutions is often much easier than making them happen. Especially for national projects with dozens of stakeholders. Stakeholders who may often have competing interests. And there is always the question of “Who pays?”

In the United States both the Congress and the executive branch of the U.S. government are addressing these issues, and in potentially complementary ways.

Congressional Mandates. With GPS as the cornerstone, both the DoD strategy and the National PNT Architecture show the need for one or more complementary systems to “overcome PNT capability gaps, predominantly resulting from the limitations of GPS.”

According to one senior official close to the issue, these systems need to be, “integrated with GPS and each other” and within the U.S. “serve all parts of the country — urban, rural, wilderness — even coastal maritime areas.” The idea being that they will constantly reinforcing GPS services while also serving as a safety net for users when during GPS disruptions.

The National Timing Resilience and Security Act of 2018 requires DoT to begin filling this layer in the National Architecture by the end of this year. The law, passage of which was overwhelmingly supported by both parties, mandates the department establish a difficult to disrupt, wide area, terrestrial timing system to backup (and complement) GPS timing signals. The system also must be expandable to provide navigation services. Even as a timing service, though, it has the potential to make navigation more reliable. Studies have shown that combining such a timing signal with GPS and other GNSS signals can dramatically decrease users’ vulnerability to jamming and spoofing.

The law also enables the system or systems to be established by leveraging commercial entities and expertise through cooperative agreements, public-private partnerships, and similar arrangements. These tend to be the most expeditious and least costly methods for putting such services in place. As such, they are expected to be very attractive to government program and contracting officials.

On military side, the in-process National Defense Authorization Act for 2021 requires DoD to quickly complete this part of their architecture also. Hinting that the department has failed to respond to combatant commanders “Joint Urgent Operational Needs,” it directs DoD to provide warfighters non-GPS PNT by 2023. It also directs the department to “enable civilian and commercial adoption of [these] technologies and capabilities”.

Presidential Order. The administration’s approach is outlined in a February 2020 presidential Executive Order. The order focuses on commercial entities that contract with the government, critical infrastructure, and research and development.

It calls for, within the next 24 months, agencies to “develop contractual language for inclusion … n the requirements for Federal contracts … with the goal of encouraging the private sector to use additional PNT services and develop new robust and secure PNT services.” The hope is that these new services will be adopted beyond just those companies who routinely serve government needs.

The departments of Energy, Transportation, and Homeland Security are also required to publish plans on how they will engage various critical infrastructure sectors to evaluate the degree of responsible use of PNT by each.

Also, the White House Office of Science and Technology Policy (OSTP) is tasked to “coordinate the development of a national plan… for the R&D and pilot testing of additional, robust, and secure PNT services that are not dependent on global navigation satellite systems (GNSS).” OSTP has already begun this and is seeking input from the public.

Competition and Many Players

Because PNT user needs are so varied and nuanced, most industry observers see growing opportunities for existing and potentially new providers.

“Systems and equipment that improve GNSS services, or that complement and augment GNSS are likely to find ready markets,” said Andrew Bach, a consultant on financial and other PNT issues. “User demands and needs are only going to become more sophisticated as their economic exposure increases.”

Congressional and administration focus on alternative PNT should enhance and multiply such opportunities. So, while there may be no silver bullet for solving national PNT concerns, the need for a robust and resilient architecture of PNT systems will likely mean abundant opportunities for providers.