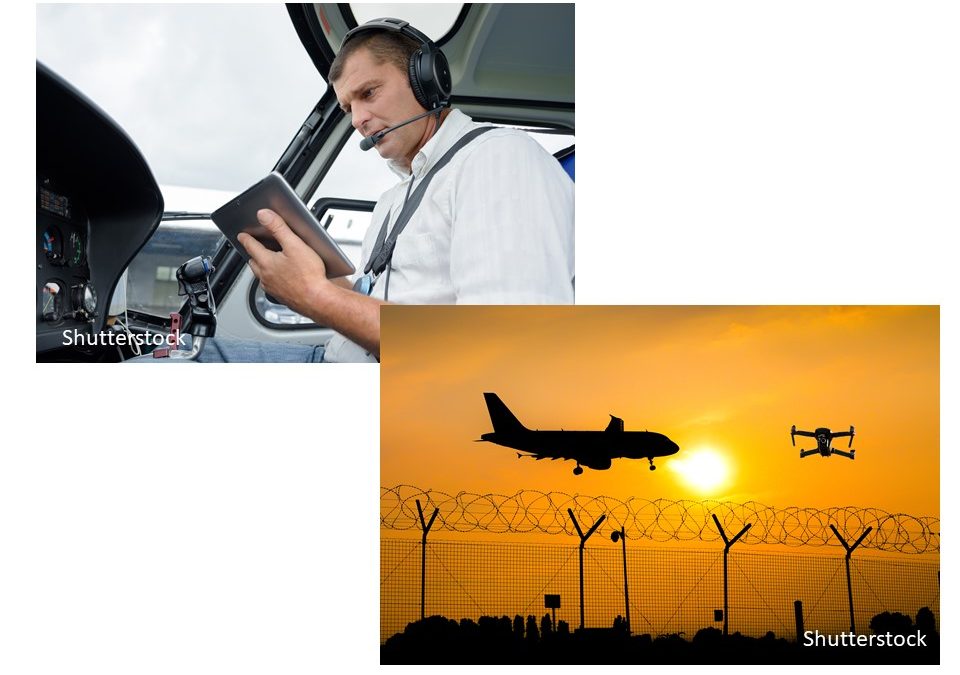 I was on an Aviation Week Webinar panel today with Doug Smith, the CEO of Ligado. The title was “5G – Threat to Aviation or the Future.”

Of course it was really about the FCC’s decision on Ligado and the impact it would have on the aviation sector. My introductory statement is below along with a link to the archived video of the webinar.

Unless you do it for a living, I am guessing it’s always awkward seeing yourself performing on camera. Oops, I said “FAA” when I meant “FCC” – twice!  Drat, forgot to unmute when I started to answer a question!

Then there are the interesting bits when you are not sure if you should answer minor bad info or just let it go and focus on more important messages (I let it go).

Ex: Doug Smith (CEO of Ligado) related a conversation he thinks he had with me. I have no recollection of it. I am often mistaken for others (Tom Cruise, for example), so maybe it was someone else he spoke with.

Also, did Doug really say they didn’t test GPS receivers until they failed, just until they started giving bad locations?

Aviation Week Webinar: “5G – Threat to Aviation or the Future”

The following is the first question from the moderator to panelist Dana A. Goward along with his answer and introductory remarks.

“The US has a need for secure 5G. How do we do that without threatening GPS?

Thanks, Jen. Great question. 5G and GPS are both important. Fortunately, we don’t need to give up one for the other.

We certainly don’t want threaten GPS. But as things stand now for aviation, once Ligado begins operation we are looking at more lost drones, more disoriented light aircraft, Electronic Fight Bags not working, and a host of other problems.

And the sad thing is that America doesn’t have to go there to have a great, world-beating 5G networks.

Ligado’s spectrum adds very little, if anything, to the total amount of spectrum available for 5G. Their spectrum is very small slice and is not used for 5G anywhere in the world. Neither the international standards group for wireless, nor the FCC list their spectrum as a band for 5G. That means there are no standards in place and no equipment available. Many of these challenges using Ligado’s spectrum for 5G were mentioned by the CEO of Verizon during a call with investors at the end of April.

And no other proposed 5G operations that we know of threatens GPS.

So, in the opinion of most folks familiar with the issue, the US can have all the 5G it wants without allowing Ligado’s proposal to go forward.

I have been following the FCC’s decision-making process on this for a long time – long before Ligado began associating its proposal with 5G. A lot of work has been done to examine the impact of their proposed operation on aviation and other sectors.

Much of the information I am going to discuss is based on technical analyses done by the US Department of Transportation. I have discussed them and the results at some length with folks at DoT and FAA.

Doug and Ligado don’t agree with the DoT studies and what I am about to tell you, of course, but that is what it is.

At a high level, the crux of the issue is that 100’s of millions of GPS receivers were built to operate very well within a quiet spectrum environment the FCC had established. The FCC decided to change that environment by allowing relatively strong signals from the ground in spectrum that had been reserved for very weak signals from space. The Department of Transportation tells us that in the new environment some receivers won’t work as well or at all.

They know this because they obtained 80 civil GPS receivers built for a wide variety of applications and tested them under the new conditions. The results varied by type and manufacturer, as might be expected. And of course, there are hundreds of varieties of GPS receivers and each is likely to react slightly differently. But there are some valuable general conclusions that can be made from their work.

I have some slides so you don’t have to look at me the whole time. 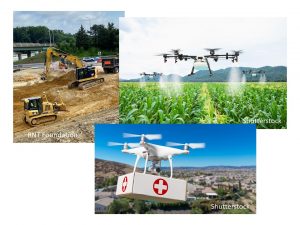 The most severely impacted will be high performance receivers such as those used by some drones for delivery, agriculture, mapping/ survey and other missions. I took the non-aviation picture you see on the left at a construction site near my house the other day. The bulldozer has a GPS antenna at each end of the blade and this allows it to be operated automatically with a precision of centimeters. These receivers are very sensitive as you can imagine. The DOT says they will be impacted when they are anywhere within 3,400 meters (2+ miles) of a Ligado transmitter. Ligado’s tower spacing of 433 meters means that this will be everywhere except areas too remote to be served by their network. So urban/suburban areas, and likely in many rural areas also. 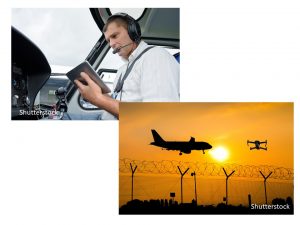 Next in line will be general-purpose GPS receivers such as those integrated into systems used by police, fire, EMS, delivery services, and others. Also, those used, by light aircraft not certified for instrument flight[1], and most drones. It does not include systems in cell phones.[2] It does include VFR panel mount, handheld and Electronic Flight Bag GPS receivers. These general-purpose receivers begin to fail within 1,040 meters (.6+ miles) of a Ligado transmitter. This would be in most parts of urban and suburban areas.

The FAA estimates every general aviation aircraft carries at least one non-IFR GPS, and air carriers carry two EFBs for a grand total of about 350,000 installed and portable devices that will be impacted.

The FAA also estimates that there are about 500,000 profession drones in the US, and a million or so hobbyist drones that will be impacted.

And it’s important to note that GPS receivers need better signals to acquire lock that to maintain it. So once a receiver gets lost it is likely going to stay until it moves out of the area of interference.

Less impacted, but not immune are TSO aviation equipment certified for IFR use by the FAA. That includes the limited number 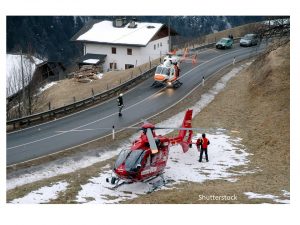 The FAA advises that these receivers are not reliable when they are closer than 250 ft horizontally (76.2 meters) of a Ligado transmitter. At ground level and with transmitters spaced at 433 meters, this means about 12% of an area served by Ligado Networks is impacted.

While 12% might not seem a lot, imagine you are an EMS, fire, or police helicopter pilot responding to accidents and other calls at all hours of the day and night. Low-level and confined area operations are the most demanding and hazardous you face. And since your Terrain Awareness and Warning System that all helicopter pilots and other low level operators have come to know and love is fed by GPS, that is impacted also.

If it was me, I would be tempted to turn it off rather than worrying about whether or not I could trust it.

I should also mention that while most HELMS helicopters have TSO certified GPS receivers feeding their TAWS system, this is not a requirement. These aircraft could be a concern  anywhere within 1,040 meters of a transmitter.

It is beyond the scope of what I am prepared to talk about today, but I am sure of interest to this audience, groups have weighed in with the FCC that approving Ligado’s operation will degrade their ability to forecast the weather and negatively impact some satellite communications services.

As I said, Doug does not agree with all of this and will say that testing that he sponsored shows different results.

But I think that his studies and the government studies showed similar kinds of things, but they were viewed differently by the two sides of the dispute. The FCC and Ligado saw any interference that did not cause a GPS receiver to fail as acceptable interference. That may or may not be a good criterion for a communications system, but we at the RNT Foundation, and folks at the Department of Transportation take a different view. We regard GPS receivers as safety of life systems and think the focus should be on preventing failure. To do this the DOT established a limit on acceptable interference that was at a point before GPS receivers began to fail. It said that any interference that added to the noise floor and degraded the signal to noise ration by more than 25% was unacceptable. It’s like putting a weight limit on vehicles crossing a bridge so the bridge never reaches its breaking point. It’s a way to keep people from getting hurt.

This 25% degradation limit, you might hear it referred to as the 1 dB standard, is recommended by the International Telecommunications Union, and has been used before by the FCC. I don’t know why they did not use it in this case.

I hope that is a good summary of where things sit from our perspective. Looking forward to more questions and the discussion.

[1] Aircraft flying under visual flight rules may have GPS as a “situational awareness” tool, but are supposed to navigate by looking at the surface. Many light aircraft have no other electronic navigation other than a GPS device not certified by the FAA.

[2] Navigation on cell phones will likely not be affected by Ligado transmissions. These devices use a narrow, less accurate slice of the GPS signal and combine it with terrestrial signals and other sensors.

This hour-long webinar was held on the 12th of June 2020 and was moderated by Moderator: Jen DiMascio, Executive Editor, Defense & Space, Aviation Week Networks.

The webinar is archived at https://aviationweek.com/webinar#Replay%20our%20on-demand%20webinars.