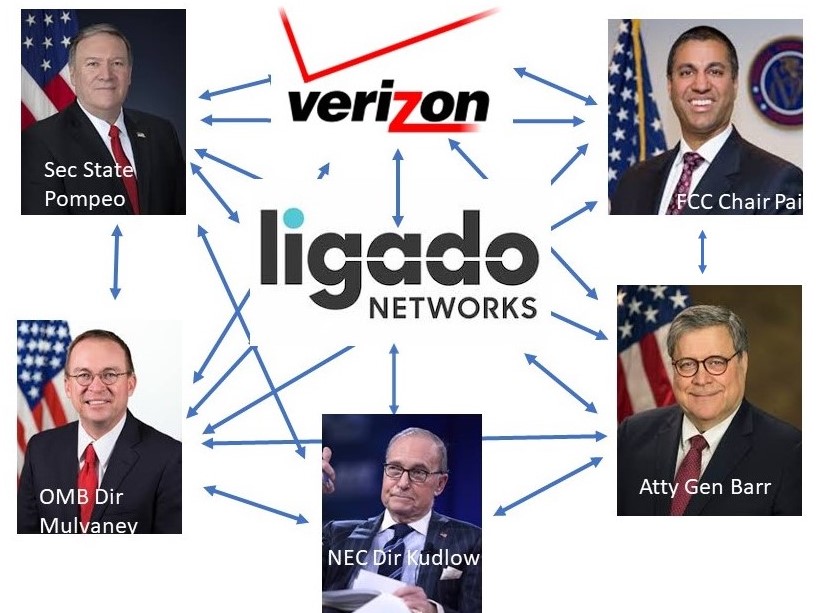 There has been A LOT of news, commentary and analysis in the less-than 24 hours since we last posted on this.

Here are some of the more interesting developments:

In addition to Attorney General Barr quickly coming out with a statement praising the FCC’s action, Secretary of State Pompeo did so as well. We can sorta understand Barr’s interest since he is former Verizon and heads the administration’s 5G task force (Ligado has recently begun claiming it wants to use the spectrum for 5G). But we are not sure why Pompeo would have an interest. As with Barr’s rapid fire praise of the FCC’s action, it suggests collaboration between the FCC and the administration that might be of questionable propriety.

Previous press reports have indicated that both National Economic Council Director Larry Kudlow and Office of Management and Budget Director Mick Mulvaney have both overtly supported Ligado’s cause with the FCC.

Very quickly after the draft order was announced, The Coalition of Aviation, Satellite Communications, and Weather Information Users filed a document with the FCC seeking dismissal of Ligado’s application and termination of the proceedings.

Is a good background item from “Inside GNSS”:

Here is an interesting commentary about “what’s next” for Ligado. The author predicts the company will sell their spectrum rights to a telecom company (Verizon being the leading candidate).

Many are sure Ligado is headed for bankruptcy, regardless.

We wonder if Barr and Pompeo are not worried about GPS disruption because they know that Ligado will never transmit. Maybe they know that Ligado will sell the spectrum rights to Verizon.  Then all that will happen is Ligado’s owners (Centerbridge, Fortress, and JP Morgan Chase) will be a little richer than they would have been if the FCC did not approve. That could come at the expense of Verizon shareholders, but the shareholders are a larger, more diverse group, and are likely much less well-connected than Ligado’s owners.