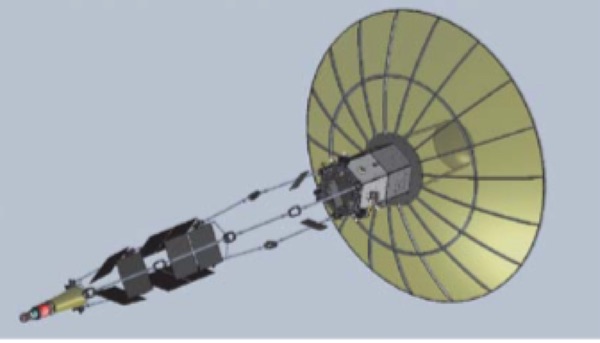 There are a lot of advantages to attacking signals vice satellites. It:

And the power you would have available from a nuclear reactor…!

An interesting bit from the article:

“…the deployment of EW [electronic warfare] platforms in orbit would be in accordance with a policy for Russia’s electronic warfare program until 2020 approved by the Russian government in January 2012. A summary of this policy indeed mentions space-based electronic warfare as one of the objectives to be accomplished in the period before 2025. More specifically, it talks about the need to deploy “multifunctional space-based EW complexes for reconnaissance and suppression of radio-electronic systems used by radar, navigation and communications systems.”

There is strong evidence from publicly available sources that a Russian company called KB Arsenal is working on a new type of military satellite equipped with a nuclear power source. Called Ekipazh, its mission may well be to perform electronic warfare from space.

KB Arsenal, based in St. Petersburg, is no newcomer to the development of nuclear-powered satellites. In the Soviet days it built satellites known as US-A (standing for “active controllable satellite”), which carried nuclear reactors to power radars used for ocean reconnaissance (in the West they were known as “radar ocean reconnaissance satellites” or RORSAT for short.) The satellites had been conceived in the early 1960s at the OKB-52 design bureau of Vladimir Chelomei before work on them was transferred to KB Arsenal at the end of that decade. The satellites’ three-kilowatt thermoelectric reactors, known as BES-5 or Buk, were built by the Krasnaya Zvezda (“Red Star”) organization. The US-A satellites operated in low Earth orbits at an altitude of roughly 260 kilometers and, after finishing their mission, the reactors were boosted to storage orbits at an altitude of about 900 kilometers. However, three of the satellites (Cosmos 954, 1402, and 1900) experienced problems with the boost maneuver; the first showered radioactive debris over northwestern Canada in January 1978. The program saw a total of 37 missions between 1965 and 1988.

In 1987 KB Arsenal launched two experimental satellites named Plazma-A (officially announced as Cosmos 1818 and 1867) equipped with five-kilowatt thermionic reactors of Krasnaya Zvezda variously called TEU-5, Topol, and Topaz. A thermionic reactor, which has no moving parts, converts heat directly into electricity through the process of thermionic emission, the spontaneous ejection of electrons from a surface. The Plazma-A satellites operated in safer 800-kilometer orbits. One of the experimental payloads (called Epikur) was intended to produce plasma clouds making it possible to mask satellites from anti-satellite interceptors.[1] This was part of a much broader effort undertaken by the Soviet Union to protect its satellite fleet from ASAT attacks.[2]

After the collapse of the Soviet Union, work on space-based nuclear reactors came to a virtual standstill and several were even sold to the US.[3] KB Arsenal turned its attention to a project called Liana, comprising electronic intelligence satellites known as Lotos-S and military radar observation satellites called Pion-NKS. These are solar-powered satellites that share a common bus. After numerous delays the first Lotos-S satellite was orbited in 2009 and it was followed by three more in 2014, 2017, and 2018. Pion-NKS is still awaiting its first mission.

On February 2, 1998, the Russian government adopted a decree aimed at reviving the dormant Russian space nuclear program. It called for resuming research and development in the field with the goal of producing nuclear reactors with a capacity of up to 100 kilowatts and an operational lifetime of five to seven years after 2010. A key short-term goal was to use nuclear reactors as part of so-called “transport and energy modules” (TEM), a Russian term for electric space tugs. The nuclear reactor would power an electric propulsion system to boost spacecraft to their operational orbits (“transport”) and subsequently provide power to their on-board systems (“energy”). This would make it possible to increase the mass of payloads delivered to high orbits by two to three times and supply them with 10 to 20 times more power than before.[4]