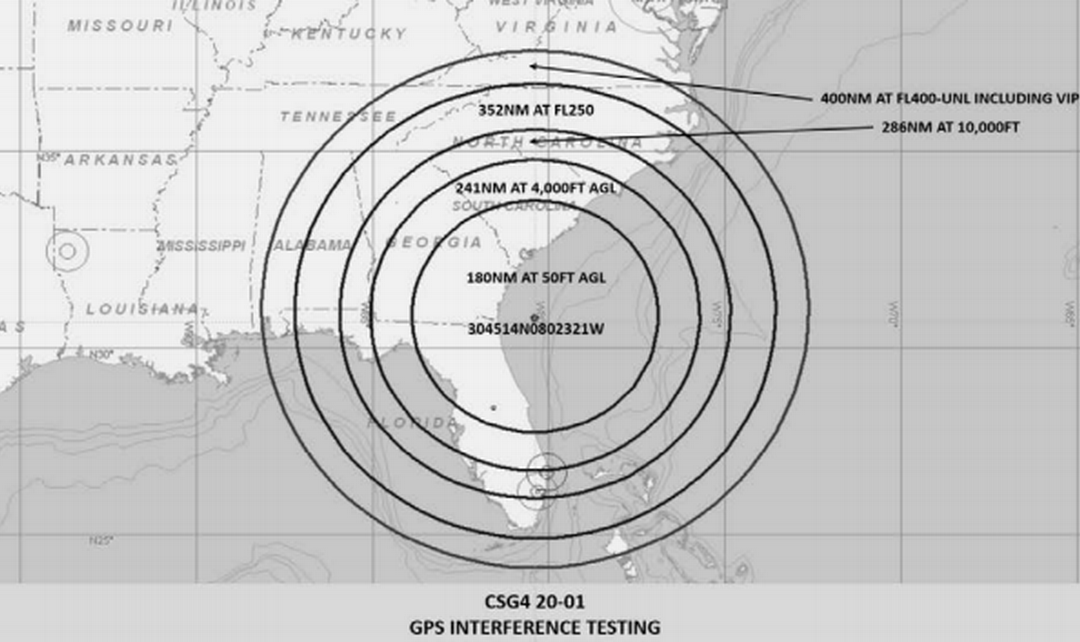 Blog Editor’s Note:  The headline of the Miami Herald article below is about a military exercise jamming “GPS for small planes.”

Of course the exercise will also jam GPS receivers on large planes, ships, and anyone else within the affected area.

Small aircraft are a special concern, though, because the FAA allows them to fly in instrument conditions (the pilot can’t see the ground) with only GPS for navigation. Also, the FAA no longer requires paper charts.

So if GPS is jammed, a small plane without another electronic means to navigate, and possibly without a paper chart, could easily get lost, run out of fuel (the two are strongly correlated), and crash.

Remember the Bermuda Triangle? It might not exist as mystics describe it, but operating offshore Florida, whether in a boat or small airplane, can be hazardous.

Imagine you are in a small plane somewhere off Miami, over water, and out of sight of land. Uninterrupted blue ocean stretches as far as you can see in every direction. Which way to your destination? Your next fuel stop?  Without GPS you can still get there, but it’s much harder.  Especially if you have been using GPS all along and haven’t practiced flying without it.

The quote from AOPA in our headline is toward the end of the article in the Miami Herald. Click “READ MORE” below.

Some pilots could be flying blind in airspace over the Southeast and Caribbean this month, according to the Federal Aviation Administration.

A military training exercise attributed to “Carrier Strike Group 4” — part of the U.S. Navy — is expected to jam GPS signals and other navigation systems intermittently from Jan. 16 to 24, the FAA said in a flight advisory Monday.

“GPS testing… may result in unreliable or unavailable GPS signal,” the advisory states.

Navigation from as low as 50 feet above ground up to Flight Level 400 (around 40,000 feet) could be affected, according to an FAA map showing interference testing from a location off the Florida-Georgia coast.