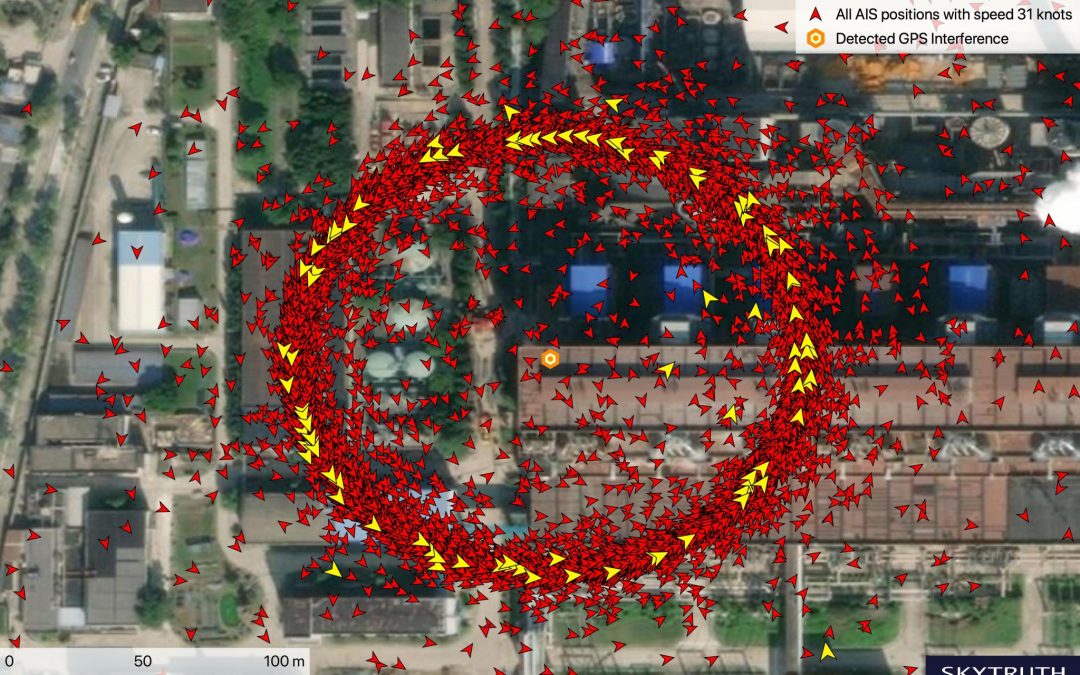 Blog Editor’s Note: “Crop circle spoofing” was reported in the literature at Shanghai several weeks ago. Researchers have discovered similar activity at 20 locations along the Chinese coast, 16 of which are oil terminals. There seems to be a correlation between the spoofing and receipt of oil from Iran in contravention of the US embargo.

The other four locations are government offices. It seems likely that the intermittent spoofing there is being used as a security measure much as it is used in Russia.

Last month, an article in MIT Technology Review described strange GPS anomalies  in Shanghai. I began investigating, and have now found evidence of a novel form of GPS manipulation occuring at at least 20 sites on the Chinese coast during the past year. The majority of these sites are oil terminals, but government installations in Shanghai and Qingdao also show the same striking pattern of interference in GPS positioning. We don’t know the reason for this interference. It may simply be a general security or anti-surveillance system but it is also possible that it is intended to avoid scrutiny of imports of Iranian crude which have recently come under U.S. sanctions. Whatever the intention, we are able to demonstrate here, through analysis of vessel tracking data, that this GPS interference can be pinpointed very precisely in both time and location.

According to the MIT Technology Review article, this phenomenon was first documented by the U.S. flagged container ship Manukai when the vessel entered the port of Shanghai in July. The captain noticed that the vessel’s AIS (Automatic Identification System) appeared to malfunction — vessels on the navigation screen appeared and disappeared without explanation and appeared to move when they were in fact stationary. AIS, originally designed for collision avoidance, transmits vessels’ GPS locations, courses, and speed every few seconds via VHF (very high frequency) radio. These signals are not only picked up by nearby vessels and terrestrial antennas, but some private companies have also launched satellites able to receive these signals. For this analysis we were able to use data made available by two of these companies, Spire and Orbcomm, through our research partnership with Global Fishing Watch.

An investigation by non-profit C4ADS (Center for Advanced Defence Studies) showed that AIS vessel locations from hundreds of ships navigating Shanghai’s Huangpu river were coming up at false locations. Strangely, vessels on the river would have their GPS location jump to a ring of positions appearing on land. And this was not just affecting ships; looking at the cycling and running app STRAVA’s tracking map of cyclists, C4ADS also confirmed that this strange pattern of interference was affecting all GPS receivers.

To further investigate the GPS manipulation documented in Shanghai, I examined AIS position broadcasts from ships in the area. A distinct pattern emerged. Upon approaching the area of interference, a vessel’s broadcast position jumps from the vessel’s true location to a point on land where false AIS broadcasts occur in a ring approximately 200 meters in diameter. Many of the positions within the ring had speeds of precisely 31 knots or 21 knots (much faster than vessels would be moving near dock) and showed a course varying depending on the position within the ring. The GPS anomaly appears to affect vessels once they are a few kilometers out from the center of the ring. Once affected, vessels begin broadcasting seemingly random positions within the ring or from other high speed positions scattered around it.