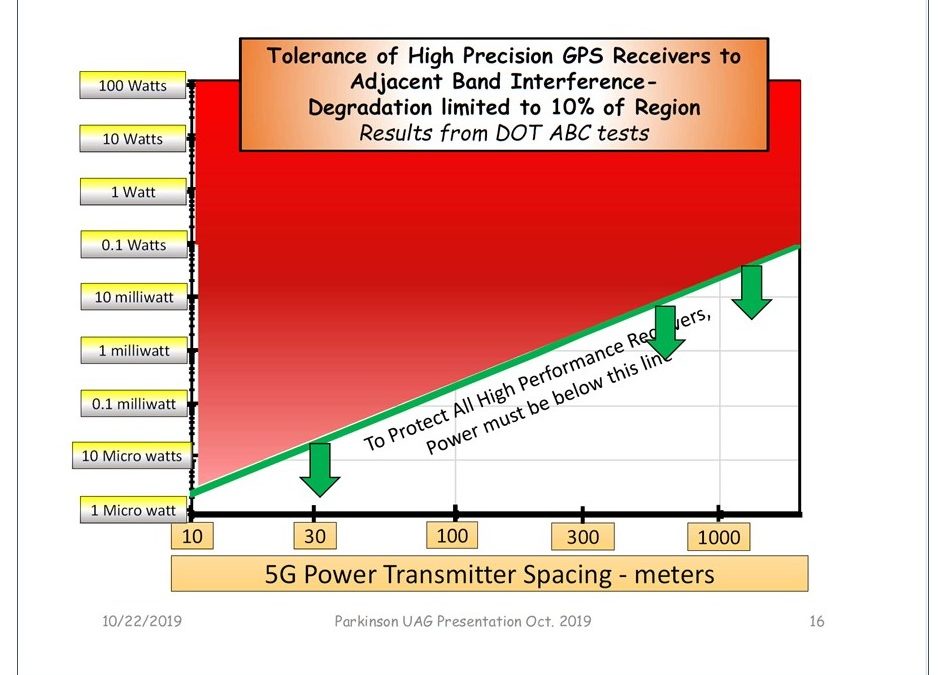 Blog Editor’s Note: Recent press reports about the FCC preparing to act on the Ligado proposal caused us to start thinking about this again. The result was us filing this letter to the docket.

The Resilient Navigation and Timing Foundation is a scientific and educational charity supporting systems and policies to protect GPS signals and users. We support a holistic approach to this that includes protection of GPS frequencies, toughening of GPS receivers, and augmenting GPS signals with difficult to disrupt terrestrial signals.

We also support uninterrupted implementation of 5G wireless technology across the nation. This is not in conflict with our desire to protect GPS frequencies. Spectrum designated for 5G is sufficiently remote from that designated for GPS and other GNSS.

We urge you in the strongest of possible terms to deny the Ligado application. It is not in the national interest.

There is overwhelming evidence that allowing Ligado to operate as proposed will degrade GPS and other satnav services for important user groups. These include high precision users, such as survey, construction, and scientific applications, and some aviation uses.

Aviation is a particular concern. In June NASA reported that a passenger aircraft nearly struck a mountain because of GPS interference while it was trying to land. This and numerous other incidents resulted in the UN’s International Civil Aviation Organization formally identifying “an urgent need” to address such interference.

GPS has become such an important utility for so many technologies that officials at the department of Homeland Security have called it a single point of failure for critical infrastructure. Doing anything to compromise it would harm the nation. Most users have no alternative to GPS and other satellite navigation and timing.

The Commission has a variety of compelling technical and policy reasons to deny.

This particular mobile satellite service band, adjacent to GPS frequencies, cannot be used for mobile terrestrial broadband. While an interesting idea at its inception, subsequent multi-year studies have clearly demonstrated that it is not practical. Attempting to achieve marginal utility by trying to circumvent the laws of physics has resulted in a long, torturous, and expensive regulatory process.

It is clear that 10 watt terrestrial transmitters in a band adjacent to GPS creates receiver overload in high precision receivers. Assertions about “listening outside the band” are spurious. ALL receivers are subject to overload if the power differential between operating bands is high enough. Proper spectrum management requires that highly dissimilar services not reside in adjacent frequencies.

The Department of Transportation Adjacent Band Compatibility (ABC) report was based upon transparent, comprehensive testing and analysis. The only “technical reports” offered in support of the waiver were very narrow, and paid for by the applicant. We also note the authors have denied these reports show what the applicants claim.

Include with this filing are slides from a recent public presentation by Dr. Bradford Parkinson of Stanford that provide more insight into the ABC report and its implications.

Granting the waiver would place a unique global public utility, worth hundreds of billions of dollars of economic value each year, at risk for a private system of speculative value. It would privilege the economic interests of one company over larger national interests, including national security.

This proposal would harm economic growth, put national security and public safety at risk, and contribute little to our 5G goals. We note the spectrum under discussion is not identified for 5G.

Federal agencies responsible for GPS national security and public safety applications are the domain experts. Every one that has spoken publicly about this proposal has been against it. The Commission should defer to their judgements.

Granting the waiver would shift risk from the new, emitting applicant, to the incumbent, victim, receivers. The latter number in the billions of units under globally diverse conditions. The system envisioned by the applicant won’t work in the US, and other nations won’t consider similar systems. This would, ironically, harm US GPS users at home while they enjoyed better protection abroad under accepted ITU rules.

It is not possible to make whole all those who will be damaged by this proposal.

The company offer to compensate the government for harm to its users fails in three ways:

There is no good reason to approve and every reason to deny.

We appreciate your thoughtful consideration.

Copy of the letter