US Department of Defense PNT strategy: ‘GPS is not enough’ – GPS World 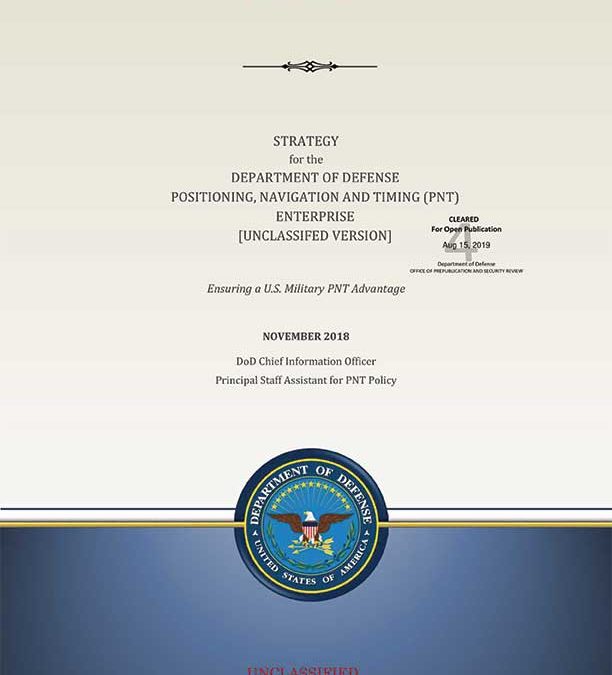 Blog Editor’s Note: RNT Foundation obtained this strategy document from a Freedom of Information Act request we made earlier this year. To the best or our knowledge and as of this writing, it is not posted on any website other than ours. Links to it are in the text of article and at the end.

Full disclosure as usual, the author of the article is the President of RNT Foundation.

US Department of Defense PNT strategy: ‘GPS is not enough’

Calling PNT “foundational,” the strategy observes that the U.S. military has over the years structured its weapons systems and business processes around GPS PNT. This has created a tremendous dependence and associated vulnerability.

Added to this threat is the realization that “At the same time, it is increasingly clear… GPS will be targeted and will not always be available in contested military operating areas, or perhaps globally.”

One of the primary ways DoD will deal with is this is to access multiple diverse sources of PNT. These will be in a multi-layered architecture of global, regional and local services.

The strategy envisions GPS, paired with military-grade receivers, as the primary global layer source. It recognizes that allied GNSS will be available, but observes that DoD has not done any accuracy and integrity assessments to determine their usefulness. And, since “…all are vulnerable to the same interference and jamming effects” as GPS, “…other sources of PNT information with different characteristics are necessary.”

The regional layer is defined by systems that service large areas such as a few countries or even continents. Recognizing that regional sources can be in space, the strategy discusses two low-frequency ground-based systems with characteristics much different from satellites — enhanced Loran (eLoran) and spatial, temporal and orientation information in contested environments (STOIC).

“Their high power and low frequency enable regional/nationwide coverage, spectrally separate from GPS services, accessible in buildings and under water, and transmitted from dispersed terrestrial locations. Each can be considered as a possible complement to GPS, depending upon operational circumstances and requirements.”

Receivers that employ a modular, open-systems approach that can ingest and integrate the various sources of PNT information are needed to take advantage of this multi-source, multi-layer strategy. And integration of the various sources must be seamless and invisible to the user, unless they decide otherwise.

“The employment of multiple PNT sources should not require user awareness or intervention to switch among alternatives during mission execution unless the user elects that option.”

A critical need for implementing this approach, according to the strategy, is the establishment of PNT input/output standards. The document notes that candidate standards have been developed, and it is vital to finalize and approve the standards and bring them into operational service as soon as possible.

The strategy includes a number of other provisions regarding internal DoD processes, the complicated governance process for PNT within the department, and some complex graphics that may be of interest to the larger PNT community.

It also sends several messages about the department’s desires, intent and concerns in the world of PNT that are worth noting.

NAVWAR. The department’s main defensive capability during navigation warfare will be the use of its layered architecture of PNT information and modular, open-systems integration. For offensive operations, it cautions warfighters to not shoot themselves in the foot. PNT is so vital to a wide variety of allied systems, it warns, that denying it to hostiles could do as much damage to friendly forces.

PNT dominance/superiority. At at time when there are more of China’s brand new BeiDou satellites in the skies of many cities, and China is negotiating with Russia for closer BeiDou/GLONASS integration, the strategy calls for the U.S. DoD to achieve PNT dominance. To date, U.S. PNT leadership has been a big contributor to the nation’s political and military leadership in the world. The strategy seeks to continue this. 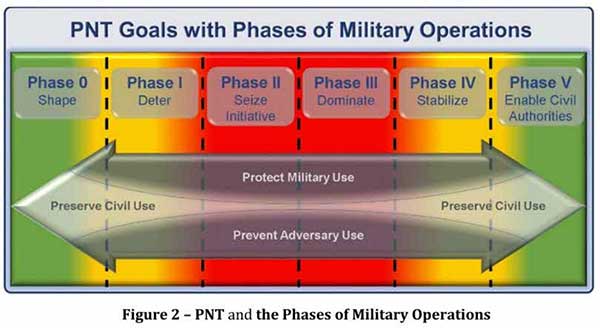 Accelerate M-code receivers. The need to get more M-code GPS receivers into the hands of warfighters is mentioned several times. GPS III satellites have been transmitting M-coded signals that are much more resilient to jamming and spoofing than civil signals since late 2018. These are useless, though, without properly equipped receivers in the field.

Future support to Civil PNT. The strategy also seems to show the department is distancing itself from support of future civil PNT endeavors. While GPS has been an incredible economic engine and boon to civil users, this has not always been in DoD’s best interests.

“It must also be recognized that in this context growing civil dependence on GPS services for critical infrastructure and public use will continue to constrain the ability of the DoD to maintain a military PNT advantage from GPS.”

It goes on to warn that future DoD PNT systems and efforts will not follow the same path to civil-military use as was taken by GPS.

“DOD must take steps to ensure the civil agencies are aware of and are sensitive to the dual-use implications inherent in GPS and other PNT Enterprise applications. From this point forward, many of the specific PNT capabilities and combinations of PNT capabilities employed by the DoD for military purposes will increasingly be classified.”

It is clear that the Department of Defense, through the very capable leadership of its CIO, Dana Deasy, has a clear idea of where it is with PNT, its critical challenges, and how to overcome them.

This does not appear to be the case for those in the federal government charged with safeguarding the interests of civil users. With responsibilities fragmented across a host of departments and agencies, efforts on behalf of the public at large are barely visible compared to those the Defense Department is taking to protect itself.

According to officials, this may change. They report that leadership of civil PNT within the executive branch is under review with an eye to making it more efficient and effective.

Perhaps it will result in a PNT strategy for the 99% of GPS users who are not connected with the Defense establishment, making them safer and more secure as well.

“Strategy for the Department of Defense Positioning, Navigation, and Timing (PNT) Enterprise” is available online.