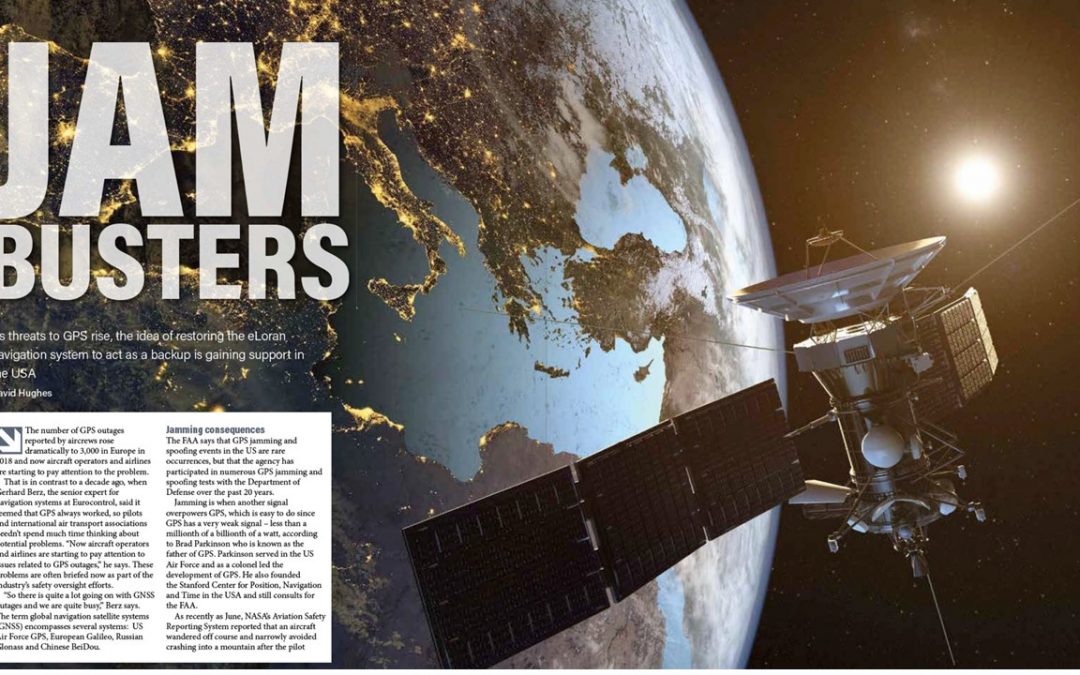 Blog Editor’s Note: An interesting article with a number of new observations from Dr. Brad Parkinson and Gerhard Berz.

For example, we hadn’t realized that the DME frequencies were highly desired by others, though it certainly make sense when you stop to think of it. Gerhard suggests that DMEs might not be sustainable in the long term because of spectrum pressures.

Perhaps proceeds from sale of DME spectrum could pay for aircraft to equip with eLoran. This would drive down government costs in the long run.  It would be much cheaper for the government to fund 25 – 30 eLoran transmitters than several thousand DME. Accuracy would be better, and the entire country would be served vice just the 30 or 40 miles around a DME.

As threats to GPS rise, the idea of restoring the eLoran navigation system to act as a backup is gaining support in the USA

The number of GPS outages reported by aircrews rose dramatically to 3,000 in Europe in 2018 and now aircraft operators and airlines are starting to pay attention to the problem.

That is in contrast to a decade ago, when Gerhard Berz, the senior expert for navigation systems at Eurocontrol, said it seemed that GPS always worked, so pilots and international air transport associations needn’t spend much time thinking about potential problems. “Now aircraft operators and airlines are starting to pay attention to issues related to GPS outages,” he says. These problems are often briefed now as part of the industry’s safety oversight efforts.

“So there is quite a lot going on with GNSS outages and we are quite busy,” Berz says. The term global navigation satellite systems (GNSS) encompasses several systems: US Air Force GPS, European Galileo, Russian Glonass and Chinese BeiDou.

Jamming is when another signal overpowers GPS, which is easy to do  since GPS has a very weak signal – less than a millionth of a billionth of a watt, according to Brad Parkinson who is known as the father of GPS. Parkinson served in the US Air Force and as a colonel led the development of GPS. He also founded the Stanford Center for Position, Navigation and Time in the USA and still consults for the FAA.

As recently as June, NASA’s Aviation Safety Reporting System reported that an aircraft wandered off course and narrowly avoided crashing into a mountain after the pilot involved and others nearby reported GPS jamming and outages. There was also an abundance of smoke in the area along the approach course to Friedman Memorial Airport in Sun Valley, Idaho. The aircraft was cleared for a GPS type of approach then strayed off course at an altitude of 10,700ft near a 10,900ft mountain. The report states if the radar controller had not noticed and intervened the flight crew and passengers would have died.

Spoofing involves transmitting a signal that allows a GPS receiver to calculate a false position. A more sophisticated version, known as smart  jamming, is when a false signal is transmitted that can’t be used by a receiver to calculate a position at all. Receivers in this case may continue to function and not show they have detected any fault. Russian use of jamming and smart jamming was recounted in a report, “Above Us Only STARS”, published earlier this year by the Washington DC based NGO the C4ADS group, which analyzes international security issues.

The C4ADS report cites 10,000 Russian GPS spoofing incidents detected over 2 years affecting 1,300 ships in the Mediterranean, Black Sea, Gulf of Finland and in the waters off Vladivostok, Russia. Some of these incidents near Russia and Syria occurred in international waters and may be a by-product of the Russian government protecting Russian President Vladimir Putin and other VIPs from drones. The report also cites incidents discovered by Professor Todd Humphreys of the University of Texas in Austin. Humphreys has devised a way to use sensors on the International Space Station to detect and record GPS signal disruption in real time.

Another report published last year by the UK Government Office of Science, titled “Time and Position: A Study of Critical Dependencies”, found a growing dependence on GNSS, including in aviation. The report cites GNSS interference measured by two sensors over four years. One was mounted on the roof of a building in London’s financial district and another near a suburban airport where light aircraft use GNSS to navigate. Both recorded around four cases of interference every day, believed to coming from road vehicles with jammers. The report found that the vulnerabilities of GNSS, both natural and man-made, are poorly understood and that a backup system is needed.

That report followed one published by the UK Government in 2017, “The Economic Impact on the UK of a Disruption to GNSS” which estimated that a five-day loss of GNSS would create a loss of £5.1 billion (US$6.4 billion). The report also shows that aviation is only receiving about 1% of the £6.7 billion (US$8.3 billion) worth of benefits from GNSS, with roads receiving 49% and emergency and justice services 30%.

Civil aviation can be affected by jamming that isn’t even intended to disrupt its operations. Potential sources include GPS jammers fitted to road vehicles and even solar activity. In addition, nation states and other groups that may want to disrupt civil aviation can directly target aviation activities and disrupt air navigation.

A solution proposed in the US to help counter the threat to GPS is to develop an eLoran (enhanced Long range navigation) system. As a terrestrial based system operating in a low frequency band, eLoran would be almost impossible to jam or spoof, according to Dana Gower (sic), who leads the Resilient Navigation and Timing Foundation in Washington, D.C.