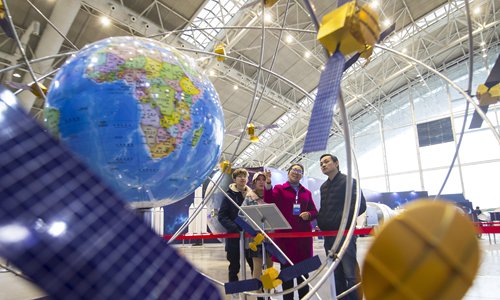 Blog Editor’s Note: We reported on this cooperation last month and assessed the concerns for GPS and America. It is interesting this month to see China touting it in public as a way to offset GPS (and by extension, US) leadership around the world.

The strategic context for this China-Russia effort is summarized early in the below article:

“As synergies between the two navigation systems are in full swing, industry observers said that such an alliance, which would yield more accurate positioning and have wider applications, could rival the US-based global positioning system (GPS) navigation system’s dominant positions and safeguard nations’ security in the face of US bullying practices that may extend to the navigation sector.”

(And where do they get the idea that the US engages in “bullying practices” in any sector?)

BeiDou-GLONASS synergies will offset dominance of US GPS

By Li Xuanmin Source:Global Times Published: 2019/9/2 22:28:40
China and Russia will soon put in place an agreement involving their respective satellite navigation systems, aiming to promote the compatibility and interoperability of the BeiDou and GLONASS  systems.

As synergies between the two navigation systems are in full swing, industry observers said that such an alliance, which would yield more accurate positioning and have wider applications, could rival the US-based global positioning system (GPS) navigation system’s dominant positions and safeguard nations’ security in the face of US bullying practices that may extend to the navigation sector.

The agreement on cooperation in the use of the GLONASS and BeiDou Global Navigation Satellite Systems for Peaceful Purposes was confirmed by the two sides during the sixth meeting of the committee of the Russia-China Project Committee on Important Strategic Cooperation in Satellite Navigation (RCPCISCSN) over the weekend. The agreement will take effect soon, according to an official press release for the event.

Industry insiders have hailed the agreement as a major step that provides a legal framework for deeper cooperation between China and Russia, signaling a transition to real and comprehensive bilateral cooperation not only in application promotion but also within navigation systems.

The agreement, which was signed in November 2018, specifies bilateral cooperation between China and Russia in the development and manufacturing of civil navigation equipment that supports both the BeiDou and GLONASS systems, according to media reports.

Under the agreement, each country will deploy three monitoring stations within their own territories for the other country to correct navigation signals, according to Russian news site sputniknews.cn in August.

During the meeting, the two sides also considered reports by four working groups involving compatibility and interoperability, satellite-based augmentation systems, the building of stations, supervision and assessment, and combined applications. Major development in these areas has been achieved.

China and Russia also signed an inspection certificate regarding the location of monitoring stations and approved a feasibility study report on agricultural projects.

The two countries will maintain close communication on development plans and the project implementation of both systems. They will also actively explore new cooperation areas and projects to promote result sharing and cooperation for mutual benefit between BeiDou and GLONASS.

The deeper synergies have far-reaching implications for the US GPS navigation system amid a US crackdown on China’s technology rise, observers said. GPS has for decades claimed a monopoly in the global satellite navigation market and it now accounts for the largest market share.

The basic composition of navigation signals in BeiDou and GLONASS network is similar, which means users could switch seamlessly from one system to another, Li Ning, member of the Precision Application Committee under Global Navigation Satellite System and Location Based Service Association of China, told the Global Times.

China has launched 46 satellites in the BeiDou constellation. Russia has put 26 satellites for GLONASS into orbit. The GPS had 31 satellites operational as of April 2019.

The partnership will also give China and Russia an advantage in pushing forward the landing of massive applications to compete head-to-head with the US GPS, Cao added.

Some industry insiders also view the tie-up as a way for both China and Russia, traditional partners with mutual trust, to jointly defend national security and counter US hegemony.

“The US has been using its national power to suppress China’s technology rise. What if US suspends GPS service to rising economic powers, just like it ordered Google to cut Android supplies to Huawei? What if GPS sends wrong signals to disrupt normal economic activities?” an industry insider, who spoke on condition of anonymity, told the Global Times.

“China and Russia cannot give up their location rights to the US and they must have something in hand that can replace the GPS if needed for national security concerns.”

In 2015, China and Russia set up the committee of RCPCISCSN to establish a government-level mechanism and platform for deeper synergies between their respective navigation systems.

Deng Xiaoci contributed to this story