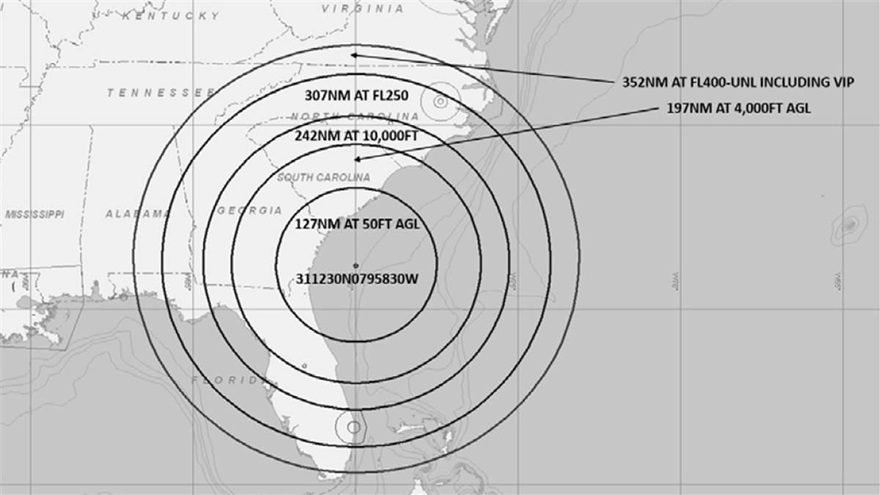 Blog Editor’s Note: A very powerful graphic above showing how a jammer at sea level can reach receivers that are quite far away if they are high enough (FL400 is 40,000ft).

Also, exercises like this help us remember that GPS is a military system and signal.

GPS aerial navigation could become unreliable or unavailable again over the southeastern United States and adjacent coastal waters during a U.S. Navy exercise that will involve GPS interference testing this Friday, Aug. 30, and next Thursday, Sept. 5.

Hurricane Dorian is bearing down on the coastal area and might affect the scheduled interference testing. The FAA advisory says that GPS interference notices to airmen may change with little or no notice, and encourages pilots to check regularly for updates. The agency did say that notams will be published at least 24 hours in advance of any GPS tests.

GPS interference testing can be expected to affect Automatic Dependent Surveillance-Broadcast as well. The FAA clarified in a July policy statement that aircraft operators who encounter GPS interference will not be held responsible for a GPS performance failure that results in noncompliance with the ADS-B rules. If a scheduled GPS-interference event is the only anticipated impediment to ADS-B compliance, the FAA said, an operator should proceed with the planned flight.

“This GPS interference supports a carrier strike group in the Atlantic and is important for military training and testing,” said Rune Duke, AOPA senior director of airspace and air traffic. “However, AOPA and airlines continue to raise concerns about the effect regular GPS interference has on safety and efficiency. The VOR minimum operational network was not envisioned to be needed on a daily basis to offset what has now become routine GPS interference. We are concerned the FAA is not adequately accounting for the safety and efficiency impacts of what is now common military activity across much of the United States.”

AOPA has been working at many levels to increase the focus on civil aviation safety as GPS interference-testing events proliferate, Duke said. The growing number of tests is resulting in increased pilot complaints, and he expects them to increase further as more pilots shift to GPS-based navigation and the FAA’s ADS-B Out mandate takes effect Jan. 2, 2020.

Pilots who experience any loss of GPS capability should inform air traffic control immediately, and file an anomaly report if they lose any capability using the FAA’s GPS Anomaly Reporting Form.

And pilots who encounter a hazardous interruption of GPS navigation—resulting in flight control issues or other safety-of-flight concerns, for example—should say the phrase “Stop buzzer” to ATC, Duke emphasized. Doing so will begin the process of interrupting the GPS interference testing and restore normal GPS signal reception, he explained. If a pilot is not communicating with ATC, he or she can use the 121.5-MHz emergency frequency.

“Pilots should only say ‘stop buzzer’ when something unsafe is occurring that warrants declaring an emergency,” Duke said. “They should make sure ATC knows that the emergency is GPS-related and that halting the GPS interference could resolve the emergency.” 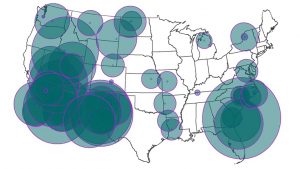 These are all the locations where intentional GPS interference has been conducted by the Department of Defense in 2019, with the 4,000 foot agl impact radius depicted. AOPA created the image using MITRE’s TARGETS software.