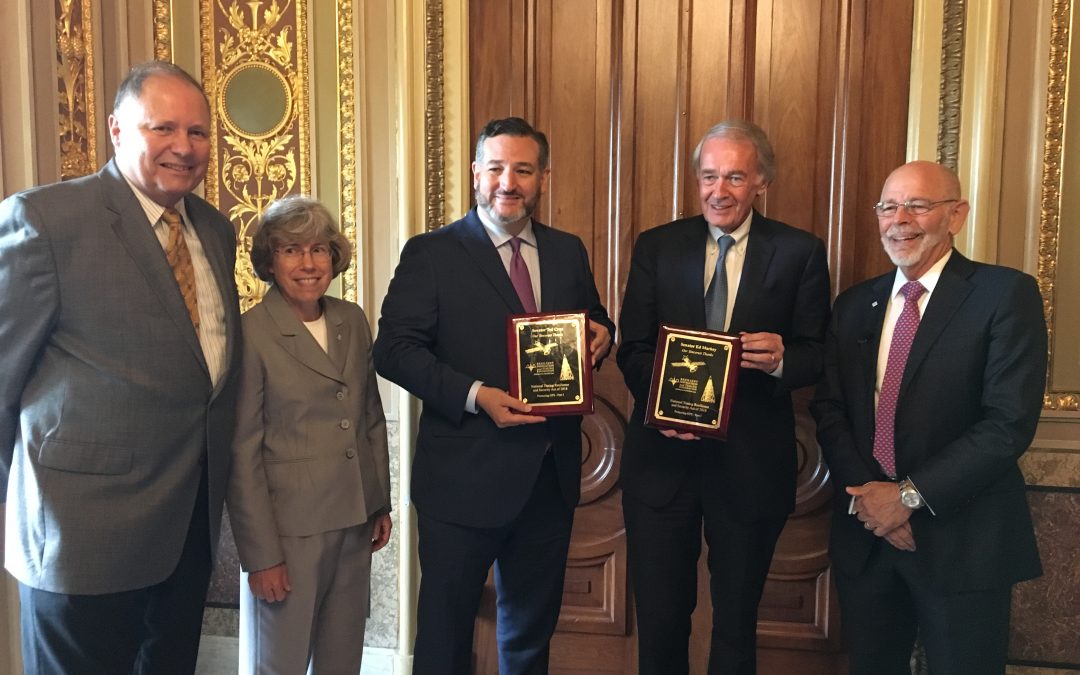 Blog Editor’s Note: Despite a lot going on in the Capitol at the time, we had a nice visit with the two Senators. Thanks to RNTF Member and volunteer Gary Thomas for the video and to Ms D. B. Goward for helping manage the event.

At an event in the U.S. Capitol last week Senators Ted Cruz (R-TX) and Ed Markey (D-MA) discussed the importance of GPS to America and the need for a backup system when signals are not available.

The event was organized by the RNT Foundation to recognize the two senators for their sponsorship and support of the National Timing Resilience and Security Act of 2018. The senators serve on the Commerce, Science and Transportation Committee where they co-sponsored and introduced the bill. Cruz is the Chair of the subcommittee on Aviation and Space. Markey is the ranking member on the Security subcommittee.

The Act, signed into law last December, requires the Department of Transportation (DOT) to establish a terrestrial timing system by 2020 to complement and backup timing signals provided by GPS. It also requires that the new terrestrial system be capable of being expanded to provide a location and navigation service.

The DOT is in the early stages of a GPS Backup Technology Demonstration that was funded by Congress early last year. Department representatives have expressed their desire to transition directly from the demonstration project to deciding upon and implementing the mandated timing system.

During the course of the event at the capitol, Senator Cruz remarked that “In today’s complex economy and life, we rely on GPS for practically everything. From the cell phones we carry in our pockets, to the navigation of ships and planes, to law enforcement and national security. And right now we are dependent on the GPS satellite system.” He said that threats of malicious attack and natural phenomena like solar flares which would disrupt GPS service endangered national and economic security. Senator Markey remarked their efforts were to ensure navigators always had the tools they needed.

The two senators are well known for often being in opposing political camps. Cruz is considered a conservative Republican, and Markey a progressive Democrat. Senator Cruz noted “these divided times” and that it was “…nice to see there are areas we can come together and work on with bipartisan cooperation.”

Markey agreed saying that it was great that “Ted and I, Boston and Houston, Rice and MIT, came together to ensure that, in the same way navigators in the past had the tools they needed for that era, we would make sure… that the 21stcentury had those [necessary] tools.”

Markey said that in this case “GPS stands for ‘a Good Political System’ ” they put together to pass the legislation.

The RNT Foundation presented the Senators plaques with images of a GPS satellite and a terrestrial transmission tower reflecting the requirements of the Act to complement existing timing signals from space with signals from earth. And because having a backup is important, each was presented one of “America’s first GPS devices” — a 100+ year-old copy of “The American Practical Navigator” by Nathaniel Bowditch.

The RNT Foundation supports a terrestrial system to complement GPS as part of its holistic Protect, Toughen and Augment approach to safeguarding GPS signals and users. Foundation President Dana A. Goward remarked that: “When the terrestrial timing signals are on-air they will be a great asset. They can be combined with GPS signals to make receivers and users much more resilient. And they will also help protect GPS signals by deterring bad actors from disrupting them since users will have a backup.” While the Act only mandates a timing system for now, Goward said, “Timing signals will be very helpful and are a great start. We hope the system will be expanded soon thereafter to also provide location and navigation services.”

Video of the presentations and the senators’ remarks is available here on the RNT Foundation YouTube channel.