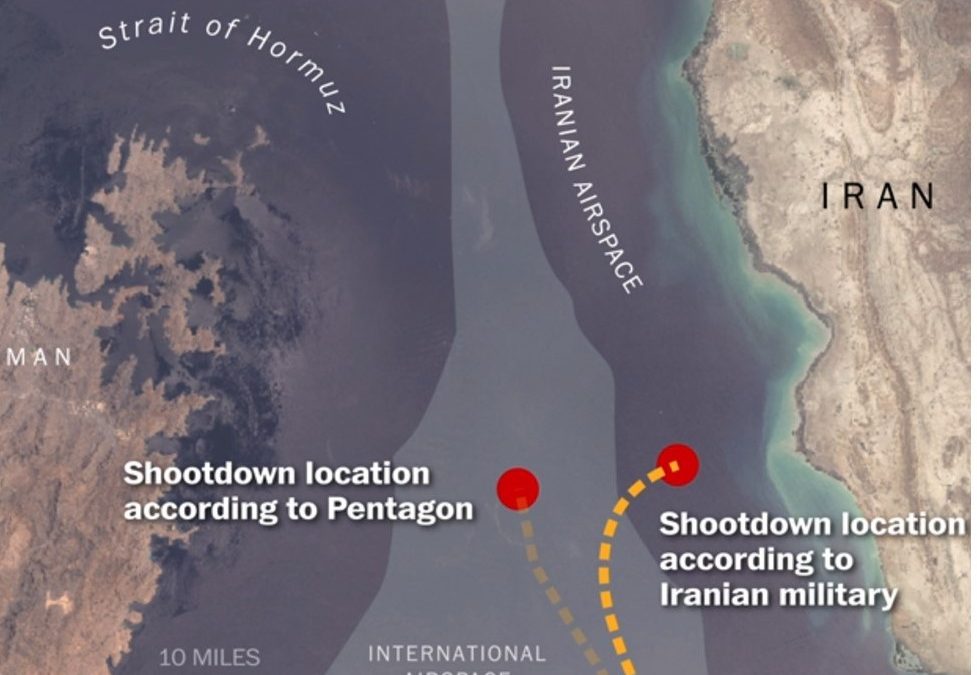 UPDATE 27 June 2019 – We just saw the following report by the New York Times that relates to our original post:

“But a senior Trump administration official said there was concern inside the United States government about whether the drone, or another American surveillance aircraft, or even the P-8A manned aircraft flown by a military aircrew, actually did violate Iranian airspace at some point. The official said the doubt was one of the reasons Mr. Trump called off the strike.”

We have had several members suggest that before the US drone was shot down by Iran last week, it was spoofed into violating Iranian airspace.

At first we regarded this as an interesting theory, but didn’t think much more about it. 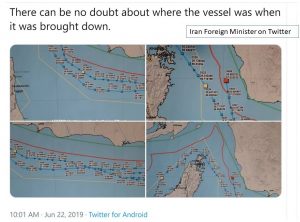 Then we saw the charts posted on Twitter today by Iran’s Foreign Minister and read of the nation’s insistence that the drone was in their airspace, and its wreckage was recovered from their waters.

We also thought about how the administration suddenly backed away from a planned retaliatory strike.

And we thought about how US forces seem to have a history of navigation problems when operating near Iran.

In 2011 a CIA drone operating in Afghanistan suddenly appeared across the border at an Iranian airfield. The Iranian military claimed they had spoofed the drone’s GPS system in order to take control and capture it.  US officials replied it was not possible to capture a drone that way. But, they didn’t offer an explanation of how the drone came to be in Iranian custody.

Then several months later Prof. Todd Humphreys at the University of Texas demonstrated how simple it was to “take over” a drone with false GPS signals and have it do what you wished.

In 2016, just after the US concluded the nuclear deal with Iran (which many hardliners in that country thought humiliating), two Navy patrol boats were on a routine mission down the coast of Saudi Arabia. Suddenly they wandered way off course and into Iranian waters. Seized by Iranian forces the crews were quickly returned to US custody in a gesture of Iranian diplomatic magnanimity. Quite the embarrassment for the US president. Especially since it was the same day as his last State of the Union address. – By the way, three years earlier Prof. Humphreys demonstrated how easy it was to deceive a vessel’s crew with false GPS signals and make the ship go where he wanted.

Government officials have told us that neither of the above incidents involved GPS spoofing. Yet the government has never explained how the CIA drone or the Navy boats ended up so far off course and captured.

We know that it is possible to deceive many GPS receivers and essentially “take over” a navigation system.

We know that this is well within the capability of the Iranian military, and they claimed to have done it in 2011.

We know the US Navy boats didn’t plan on going any where near Iranian waters in 2016, but ended up there anyway at a time of great tension between the two nations and of maximum embarrassment to the US President.

And we know that after the drone was shot down last week, an administration that seemed like it was looking for an excuse to engage Iran militarily, abruptly cancelled plans for an air strike…

The RNT Foundation thinks that using multiple sources of electronic navigation signals, such as GPS and Galileo combined with difficult-to-disrupt terrestrial signals like those from Saudi Arabia’s Loran-C (easily accessed in the Persian Gulf) could help ensure US forces stay on course in future.

As for what really happened to the drone this week – we may find out in 50 years when all the documents are declassified.