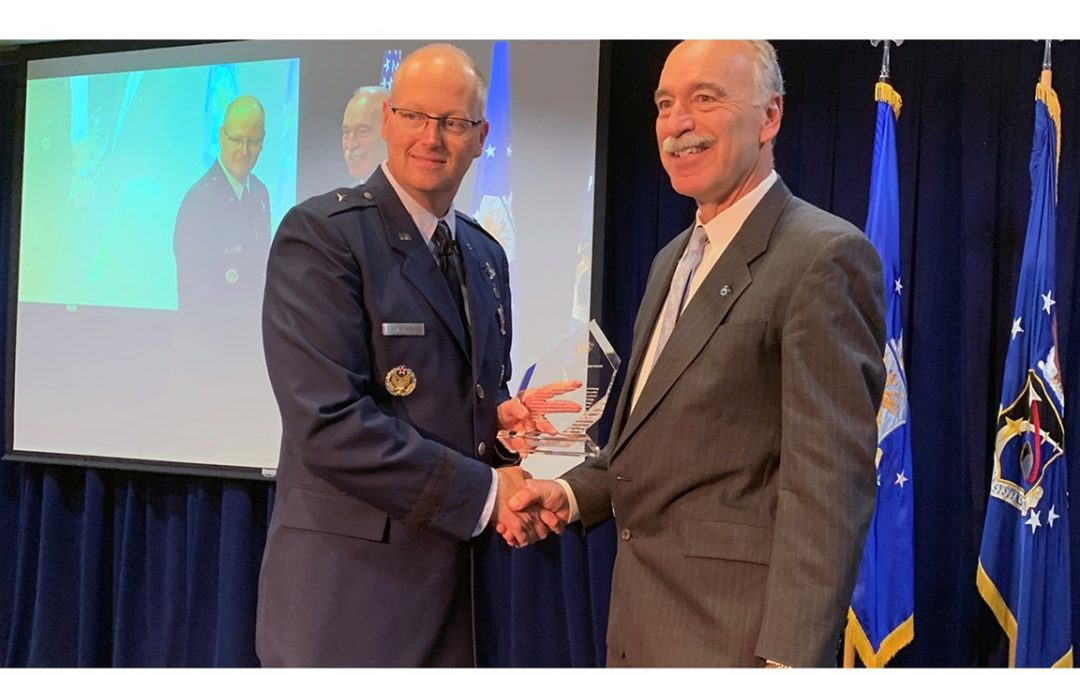 Blog Editor’s Note: Dr. Betz, among his many accomplishments, is also a long serving member of the National PNT Advisory Board where he helps advise the Deputy Secretaries of Defense and Transportation on GPS issues.

GPS. It’s such an integral part of our lives, you don’t even need to spell it out. We just take it for granted.

But the U.S. Air Force doesn’t. That’s why the U.S.A.F. annually honors the pioneers behind the Global Positioning System, through its GPS Hall of Fame. Last week, the Air Force’s GPS Directorate added  MITRE Fellow Emeritus John Betz to the list for his groundbreaking contributions to the system that guides us home and ensures military equipment accuracy.

A note to Betz from Air Force Brig. Gen. Steven P. Whitney, director of Global Positioning Systems, describes how the Hall of Fame “recognizes individuals from industry and government for their exceptional contributions to GPS and the future of our nation’s space program.” The Air Force originally developed GPS and still is responsible for its development and operation.

Betz’s work has addressed both civil and military aspects of GPS, along with influencing all of the world’s satellite navigation systems. The plaque Betz received during the ceremony summed up his many achievements:

Dr. John W. Betz greatly contributed to modernizing the Global Positioning System, devising new signal modulations used on GPS and all other satellite-based navigation systems, and developing new theories to describe advanced receiver performance. He was a leader and technical contributor in design of the GPS Military-Code (M-Code) signal. Dr. Betz also helped design the GPS LIC signal, now used by every major worldwide GNSS system. He led a presidentially appointed team in 2015 to solve a critical national security issue with GPS. For over 25 years, U.S. Government leaders have called upon Dr. Betz’s insight and knowledge to protect and improve GPS for the U.S. and the world.

Betz attended the induction event at the Space and Missile Systems Center in Los Angeles, home of the GPS Directorate.

“It’s a great honor to be recognized in the Hall of Fame with the ‘giants of GPS,’” he said afterwards. “But for me, the greatest reward has been the opportunity to contribute to GPS modernization, improving what GPS does for our military, for the nation, and for the world.

“I think that GPS is the ultimate ‘team sport,’ and I’m glad to be part of the MITRE team.”

Betz, who joined MITRE in 1989, has been honored previously by the Institute of Navigation, the IEEE, and the International Association of Institutes of Navigation, among other organizations, for his influence on the development of satellite navigation. Which begs the question: What does one of the pioneers of GPS use when finding his own way home?

“I am very indiscriminate in my GPS use,” Betz admits. “When driving a new route, I have both Google Maps and Waze operating on my iPhone and often use the original navigation in the car as well. They provide different traffic alerts and often different routings.

“However, they’re all using the same GPS signals and pretty much the same GPS processing—it’s the mapping, navigation, and traffic software, none of which is actually GPS, that differ.”