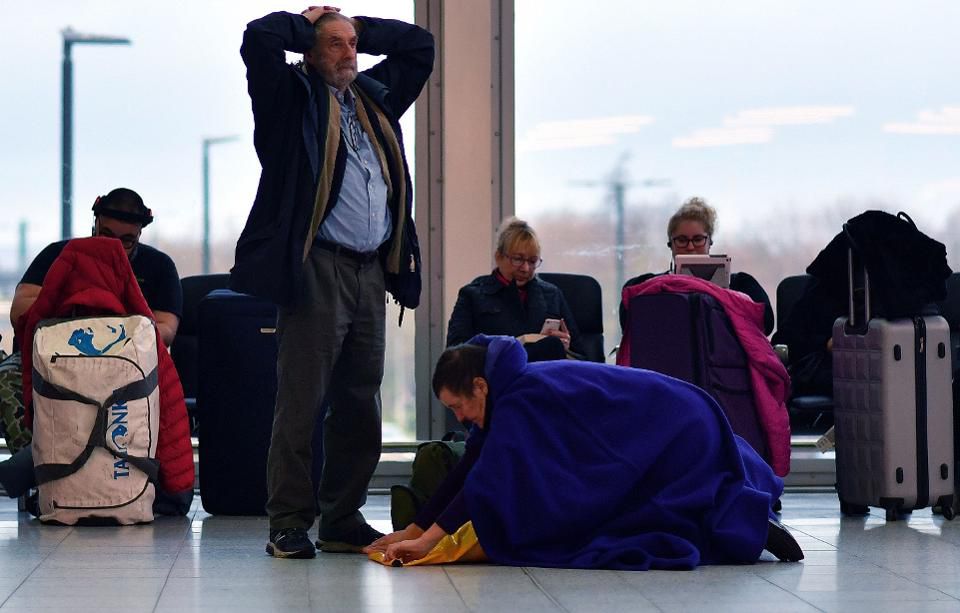 A passenger rolls away a sleeping aid as she sits with her luggage at London Gatwick Airport on Friday as flights started to resume following the closing of the airfield due to a drone incursion. (BEN STANSALL/AFP/Getty Images)GETTY

Blog Editor’s Note: While the below “Forbes” article is focused on drones, it touches on GPS and jamming. More importantly, the points made about outdated laws and unprepared enforcement and prosecution are equally applicable to a host of technologies, especially GPS services. While legal systems almost always lag technology, it seems that this has become particularly pronounced for technologies using the radio frequency spectrum.

The primary governing statute in the United States, for example, is the Communications Act of 1934. We wonder if over the last 85 years technology might have evolved some. If, perhaps, radio frequencies are not vastly more important to every facet of life today than they were before WWII. If, perhaps, its not time for the FCC and Congress to put their heads together and restructure our legal regimes to protect some of the nation’s most important and valuable services.

Ability To Stop Drone Attacks In U.S. Is Lacking, And It’s The Legal Vision As Much As The Tech

The Gatwick Airport drone incident has raised sudden awareness of the need for counter-drone technology, but just as important as the current lack of good solutions, the U.S. also has not yet developed the legal strategy and training to enable law enforcement and prosecutors to respond to these types of events and appropriately prosecute the perpetrators.

Gatwick Airport, which is just south of London, was shut down from late Wednesday through Friday morning by numerous sightings of drones flying over the airfield, causing major disruptions not only to travelers at the airport, but also at other connecting airports.

You may have asked, “Why can’t they just shoot it down? Don’t we have some technology that can prevent this?”

Unfortunately, current counter-drone techniques have major drawbacks. There are two types: detectors and defenders.  Detectors do just that, detect drones using different methods (radar, radio waves, etc.). Defenders disrupt or destroy the unmanned aircraft using all sorts of creative technology: shotgun shells; jammers that disrupt the radio frequency signals between the drone and the pilot; GPS signal spoofers, which allow taking over control of the drone; lasers; and even trained eagles. Each of the types of technology has a different price tag and effectiveness for different types of scenarios.

While some of these techniques have been used effectively by the military in war zones and by intelligence agencies, such as jamming and GPS spoofing, they have been made illegal for unauthorized use by law enforcement in the U.S. due to the collateral damage that they could cause. In the United States, there are anti-jamming laws and anti-GPS-spoofing laws. It is illegal to damage or destroy an aircraft or hack into a drone. Civilians or authorities who used these counter-drone techniques would open themselves to extra lawsuit liability from plaintiff attorneys whose clients might have been hurt because of the illegal operation.

In using a jammer to take down a drone, it would also disrupt the use of that radio frequency spectrum in a wide area for a host of important functions, interfering with Wi-Fi and cellular communication signals and airport navigation aids, and potentially resetting equipment for power companies.