EMI from LED? Yes for DSC, AIS. GPS too. 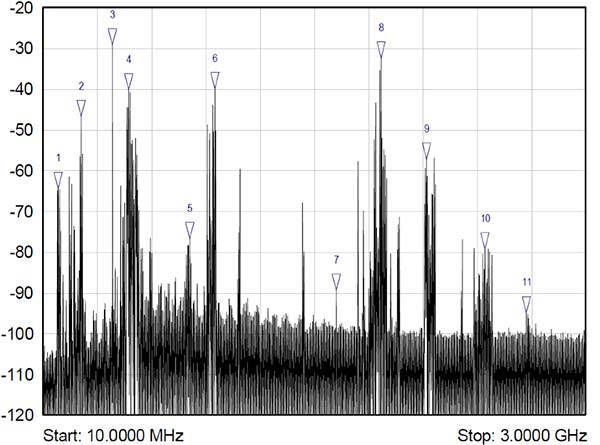 Blog Editor’s Note: The US Coast Guard issued the below warning last week. Seems the power conversion circuitry on LED lights, especially inexpensive ones, can generate a broad spectrum of electromagnetic interference.  As one of the experts we contacted said “It’s easy (cheap) to get LED power electronics to work, rather more difficult (expensive) to prevent them generating EM mush from DC to daylight.” It seems that the LED wiring can even act as an antenna and help broadcast the noise.

Good GPS timing signals are needed for proper operation for DSC and AIS radios.  Since GPS signals are so weak and easily disrupted, we wonder if the problems the Coast Guard is reporting aren’t just symptoms of LEDs disrupting GPS signals.

Radio frequency interference caused by these LED lamps was found to create potential safety hazards. For example, the maritime rescue coordination center in one port was unable to contact a ship involved in a traffic separation scheme incident by VHF radio. That ship also experienced very poor AIS reception. Other ships in different ports have experienced degradation of the VHF receivers, including AIS, caused by their LED navigation lights. LED lighting installed near VHF antennas has also shown to compound the reception.

Strong radio interference from LED sources may not be immediately evident to maritime radio users. Nonetheless, it may be possible to test for the presence of LED interference by using the following procedures:

If the noise floor is found to have been raised, then it is likely that both shipboard VHF marine radio and AIS reception are being degraded by LED lighting. In order to determine the full impact of this interference, the Coast Guard requests those experiencing this problem to report their experiences to the Coast Guard Navigation Center. Select “Maritime Telecommunications” on the subject drop down list, then briefly describe the make and model of LED lighting and radios effected, distance from lighting to antennas and radios effected, and any other information that may help understand the scope of the problem.

This Safety Alert is provided for informational purposes only and does not relieve any domestic or international safety, operational, or material requirement. Developed by the U.S. Coast Guard, Spectrum Management and Telecommunications Policy Division. Distributed by the Office of Investigations and Analysis. Questions may be sent to [email protected].

This blog is not a replacement or substitute for the formal posting of regulations and updates or existing processes for receiving formal feedback of the same. Links provided on this blog will direct the reader to official source documents, such as the Federal Register, Homeport and the Code of Federal Regulations. These documents remain the official source for regulatory information published by the Coast Guard.