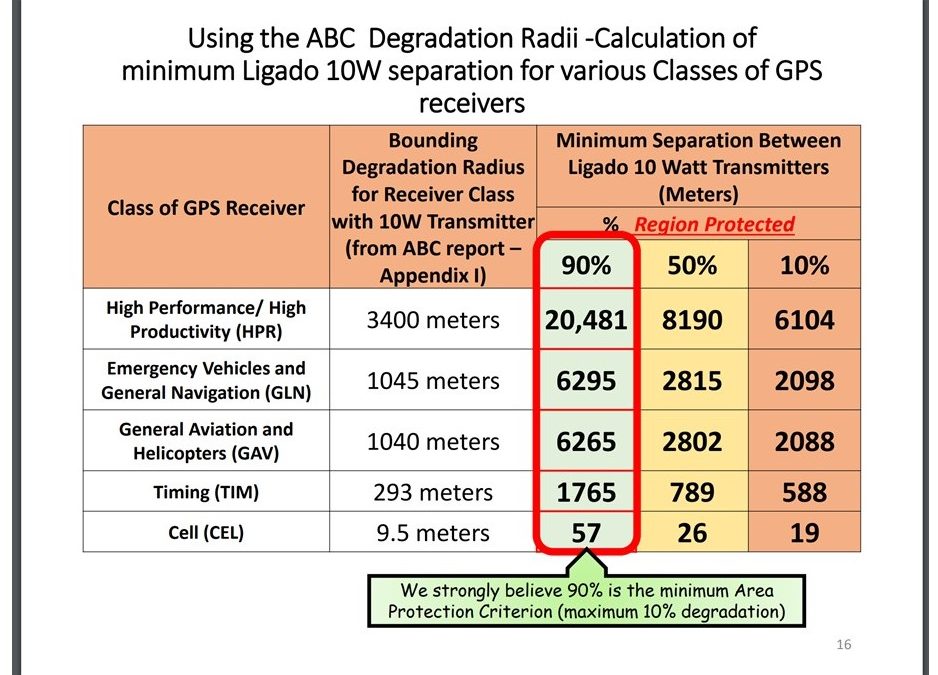 GPS is really great and the the US government has actively encouraged its use for decades. It has has brought untold increases in efficiency, brand new services, and new businesses.

So why would America want to contemplate experimenting with something that could screw up GPS services?

Sure using spectrum better is a good goal. But the government has not even started on a list of things to protect GPS and PNT in this country that in 2004 it said it would do.

Let’s start cracking down on illegal jammers, requiring use of better receivers for critical applications, and providing a powerful, difficult to disrupt terrestrial signal first. Then we can see where we are and whether better spectrum use is possible.

Full disclosure – RNTF President Dana A. Goward is a member of the US National PNT Advisory Board discussed below.

The NationalSpace-Based Positioning, Navigation, and Timing (PNT) Advisory Board urged opposition to the proposal saying that even if the transmissions’ power was lowered to just under 10 watts it “will create totally unacceptable interference for a great number of GPS users in the United States.”

Ligado has two bands, licensed now for satellite use, located particularly close to the GPS frequencies. The company and its predecessor LightSquared have been trying since 2010 to convince the Federal Communications Commission (FCC) to allow the frequencies to also be used for terrestrial communications, including for the Internet of things (IoT). To ease opposition from the GPS community and a host of GPS users Ligado pledged not to use the 1545-1555 MHz band for terrestrial applications and said in May it would lower the power in its proposal for the 1526-1536 MHz band to 9.98 dBW to avoid interference with certified aviation receivers.

The ExCom will decide whether or not to agree with the recommendation and send its decision to the National Telecommunications and Information Administration (NTIA). NTIA will convey the government’s perspective to the FCC, its commercial sector counterpart. In 2012, after the ExCom and the NTIA came out in opposition to LightSquared’s proposal, the FCC put the project on indefinite hold.

Board co-chair Brad Parkinson said in an analysis presented during the meeting that protecting 90 percent of the high precision GPS receivers within 100 meters of a tower would require the firm lower the power of the signal to 0.00022 watts. Alternatively, he said, the firm could place the towers further from each other. Protecting 90 percent of GPS high precision receivers, for example, would require spacing the terrestrial towers more than 12.5 miles (20.5 kilometers) apart, based on test results from the Adjacent Band Compatibility Assessment done by the Department of Transportation. (See chart above). Studies have shown that high precision receivers are the most susceptible to this type of interference.

Parkinson pointed out that his analysis looked only at a single tower and not at the additional possible interference caused by multiple towers.