Here is the third of the three case studies:

We received a report of interference in Tokyo, Japan, and took a receiver there to investigate. FIGURE 14 shows the maximum received power throughout the dataset. The interference around 1570.69 MHz is obvious and easily to identify in the figure. 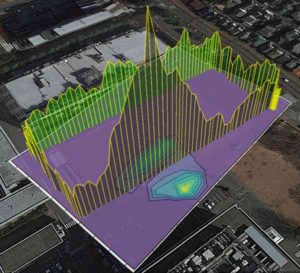 This figure also shows the estimated goodness-of-fit interference map produced using the algorithm described earlier. The source of the interference could not be conclusively determined; however, we believe that the source was emanating from one of the vehicles in the parking lot.

This real example illustrates how useful this visualization of the observed power is in understanding the nature of the interference, identifying the source and localizing its effect. The interference in this case did not cause a noticeable change in the number of satellites or signals tracked.