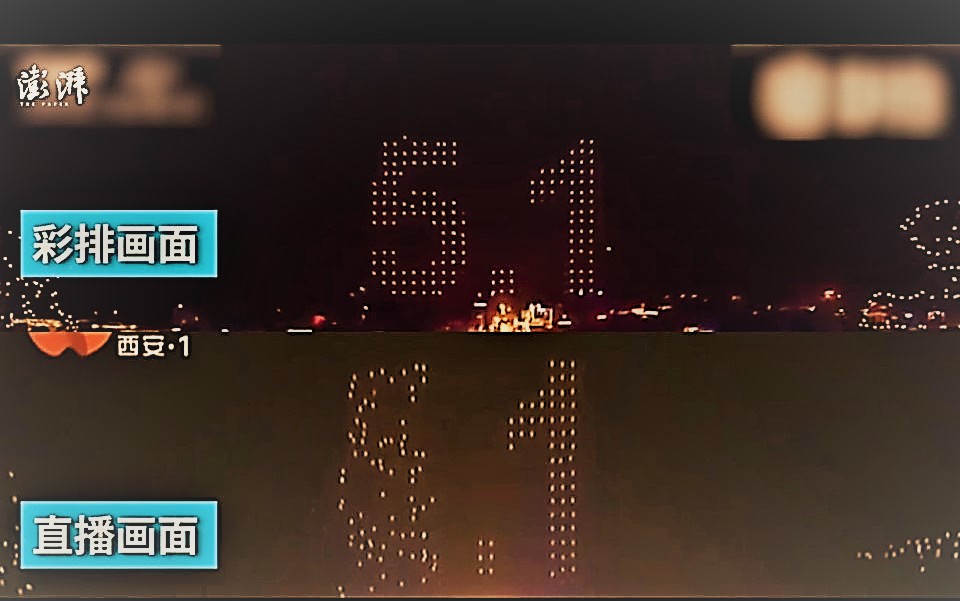 Blog Editor’s Note: The associated video (here) compares the actual display with the way it was supposed to have played out. It is clear that the disruptions were localized, but probably came from two or more sources. The center right portion of the display is as planned, but the left and right portions are corrupted.

This report has only been published in Chinese, to the best of our knowledge. The version below is provided using Google Translate and our sense of how it should read in English.

Bold type in the story below was added by us. Thank you to Guy Buesnel and Mia Swain of Spirent for bringing this item to our attention.

The Beijing News reported earlier that on the evening of May 1st, in front of the Yongning Gate of the Xi’an City Wall, a drone light festival called “Spring Dance Xi’an” was staged. A total of 1,374 drones took part in the event. However, some drones dropped down and were out of order shortly after the performance began. It was originally planned that to be the largest number of drones performing at the same time in China.

The Beijing News reporter learned from the Xi’an City Wall Management Committee that the drone performance was under the responsibility of a third-party company and was troubleshooting errors.

The performance technology provider, Guangdong Yihang Bailuo Media Technology Co., Ltd., said that, after the performance was over, industry experts conducted data analysis on 496 affected drones. Background data showed that drone equipment, communication systems, and flight systems were normal, but some of the drone’s positioning and auxiliary positioning systems were subject to directional interference after take-off, causing abnormal data in their location and height.

For the on-site demonstration of unmanned drones, “Everyone apologized.”