Blog Editor’s Note: We have reported several times on GPS disruptions in the Philippines. See for example Unsafe Airspace  and Aviation Disruptions.

Kudo’s to RNTF member Guy Buesnel of Spirent for finding this ICAO report and the outstanding Linkedin post below. Guy provides a detailed look at the real impacts on landing operations and the pilots dealing with the problems.

Aviation Safety – I have flown hundreds of approaches into busy airports. The last thing a pilot needs is hazardously misleading information mixed into all of the other inputs and tasks that need to be successfully juggled. It would be better if the Philippine government just instructed all pilots to disable GPS navigation before entering the area.

We are reproducing Guy’s entire post here for the benefit of those who don’t have a Linkedin account.

Manila Airport experienced over 50 incidents of harmful GPS interference in just 3 months, according to a newly-available ICAO report. The aviation industry must address this growing category of risk.

A newly-released report from the International Civil Aviation Organisation (ICAO) has revealed that a single airport saw over 50 incidents of GPS interference in just one 3-month period in 2016.

According to the report, flight crews reported more than 50 incidents of harmful GPS interference at Ninoy Aquino International Airport in Manila, Philippines, between March and May 2016.

Flights coming in to land on Runway 24 frequently experienced total loss of GNSS reception in the critical instrument approach phase. According to the report, this “sometimes led to missed approaches”, forcing flight crews to go around and re-approach the runway using back-up navigation systems.

What’s more, interference to the GPS signal meant incoming aircraft couldn’t accurately broadcast their position to air traffic control via the global ADS-B aircraft position identification system. Sometimes the onboard ADS-B couldn’t report a position at all, and sometimes the position it reported was massively at odds with the aircraft’s true position (see image below). 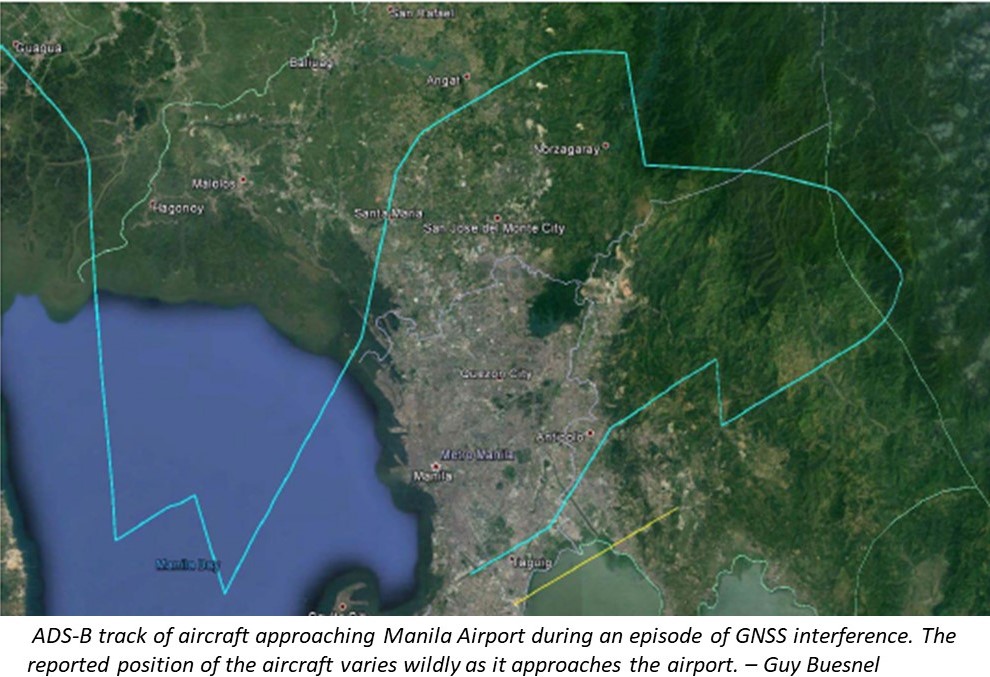 The scale of the disruption was so severe that in October 2016, the Civil Aviation Authority of the Philippines issued a Notice to Airmen (NOTAM) for all flight crews to “exercise extreme caution” when approaching or departing from Manila Airport.

We can get an idea of the impact on flight and air traffic control operations from reports to NASA’s Aviation Safety Reporting System  (ASRS) database and elsewhere.

ASRS is an online database where aviation professionals can voluntarily report safety-related incidents, and is a good primary source for understanding the impact of GPS interference on commercial flights. It contains two reports of interference at Manila; one from July 2016 and one from February 2017 (although none from the 3-month period covered by the ICAO report).

Here’s what the pilots had to say:

“Complete GPS loss of signal as we crossed the coast in point to RPLL [Ninoy Aquino International Airport]. Signal was lost for remainder of flight. Also on takeoff from RPLL we had a complete loss of GPS signal until coast out. No notice on NOTAMs viewed. No notices on RPLL ATIS.”

“On arrival into RPLL, we experienced a dual GPS failure. Both GPS indicated invalid on the CDU. This occurred on final approach to runway 24 around 20 miles from landing. We were able to continue and land visually uneventfully and the AC discrepancy was added to the logbook. We were informed by the local station maintenance that this is a known issue that has happened repeatedly and is being investigated.

Both GPS systems were confirmed normal operation and the discrepancy was cleared on the ground before departure. On departure on Runway 06, once again both GPS signals were lost soon after departure. At 30 miles to the east of RPLL while proceeding toward JOM VOR, both GPS systems were operating normally. They both seemed to come back to normal reception simultaneously. There were no further anomalies during the remainder of the flight.”

“Expect your GPS to be trashed”

And here is a rather more exasperated report submitted to an industry forum, Flight Service Ops Group, and reported on SafeAirspace.net:

“I wish to highlight to your organisation a most unacceptable hazard in safety in the Manila Area. Special note needs to be taken and heeded by all arriving crew.

2) Allow sufficient fuel for lots of low level vectoring and expect it.

3) Note the TMA radar is U/S and controllers need to use phone patch to area radar to confirm any situational issues they have procedurally controlling aircraft. – seriously affecting sequencing

4) EXPECT your GPS to be trashed

5) Only one ILS [approach] therefore if you are expecting a GPS [approach]- forget it.

I recently flew our aircraft into Manila and when we were within 30 nm our GPS system failed. This affects ADS –B of course as well as ability to use GPS based systems. Eg synthetic vision. Apparently the issue is that North of the field the Military have set up some system that affects the GPS signals. (unconfirmed that it is the case but the signals are corrupted)

Expect GPS to return only when on the ground.

On departure and early climb out you will experience loss of GPS. This will clear when you are 30 nm plus from RPLL.”

What caused the interference?

The interference at Manila appears to have stopped now. The NOTAM exercising caution expired in February 2017, and I haven’t found any reports of interference later than that date anywhere online. (If you know of any, please do leave a comment below.)

But what’s still not clear is the cause. The ICAO report leaves us on something of a cliffhanger, with two potential sources investigated and ruled out, and one other investigation still ongoing.

As the interference was experienced over a wide area (between 14 and 30 nautical miles out from the airport), it was felt that the source might be something like a mobile telecoms transmitter, so the ICAO asked the Philippines National Telecommunications Commission (NTC) to look into it.

The NTC investigated and ruled out one TV transmitter tower (by persuading the station to stop broadcasting for a moment) and a number of mobile network masts. That left a third suspect: “a TV station of a very influential religious group in the Philippines”. At the time of the report, this group had been sent letters by the NTC, but no further developments had been forthcoming.

From my own experience of analysing GPS interference waveforms, the above image showing misreported aircraft position on ADS-B certainly suggests a malfunctioning radio, TV or cellphone transmitter, rather than a more localised source like a personal privacy device (jammer).

It’s the kind of issue we’re bound to see more of, as the radio spectrum becomes increasingly squeezed.

From the pilot reports, it’s clear that the interference at Manila caused unnecessary stress for flight crew. We can also assume that misreported aircraft positions from ADS-B also caused confusion and stress for air traffic control, who apparently had trouble sequencing landing slots as a result.

While there’s no suggestion that anyone’s safety was at risk, this kind of sustained interference can have considerable negative commercial impact for airlines and airport operations.

Airlines spend more on fuel when flights have to go around and re-attempt runway approaches, especially if they have to stay in a holding pattern awaiting a new landing slot. And airports are continuously looking for ways to make landings more efficient, in order to be able to accommodate more of them – which is impossible when GPS interference makes fast, efficient landing impossible.

As aircraft, airports and air traffic control all come to rely more heavily on GPS, interference to the signal is becoming a significant operational risk. The situation in Manila shows how bad things can get if the interference source is not swiftly detected and removed.

I’d advise all airport authorities to assess their risk exposure to potential GNSS interference (now and in the future) and understand how different types of interference could affect their operations and aircraft using the airport. That’s the first step to taking appropriate action to ensure that flights can land and take off safely and efficiently, and that air traffic control can function as normal.

Stay up to date with GNSS cybersecurity developments

Threats to GNSS-based position, navigation and timing (PNT) systems are evolving all the time. To stay up to date with the latest news on GNSS vulnerabilities, join the growing community in the GNSS Vulnerabilities LinkedIn Group.