Too Much Sun Could Wreak Havoc on Driverless Cars – Bloomberg

Blog Editor’s Note: We understand from developers that autonomous cars will be able to use wheel counters, hyper-fine maps, Lidar, cameras, and other sensors to find there way when GPS/GNSS is not available. Space disruptions are still likely to impact them, though, by making it more difficult to initialize (determine position when powering up), and enabling an Intelligent Transportation System (ITS). To achieve an ITS, vehicles will have to be connected to each other, traffic signals, flow coordination, etc. This will require a functioning network which, at the moment, requires uninterrupted GPS/GNSS. 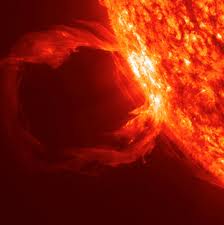 Too Much Sun Could Wreak Havoc on Driverless Cars

Self-driving cars are still working to master the snow. It turns out that excessive sun can also pose a problem for the coming wave of robot drivers.

The threat comes from solar storms, those occasional eruptions of vast amounts of energy that can cause a massive spike in geomagnetic activity and radiation. While these storms aren’t immediately evident to human drivers, they can sever the data connection between a vehicle’s global-position system and the satellites that supply location information. That’s what could spell trouble for driverless cars now under development, at least if engineers aren’t careful.

Scott McIntosh, director of the high-altitude observatory at the National Center for Atmospheric Research in Boulder, Colorado, warns that self-driving systems should not be overly reliant on GPS when it comes to programming a 5,000-pound vehicle on how to get itself from Point A to Point B. In the event of solar trouble, legions of computer-driven cars would pull over and wait for connectivity to return.