Blog Editor’s Note: This article speaks to general principles as well as the specifics of Ligado’s proposal to broadcast adjacent to GPS frequencies.  We also provide a link to the larger paper upon which the article is based at the end of the post. 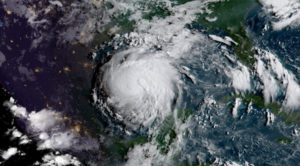 During Hurricane Harvey, which caused record flooding in Houston, emergency managers relied on data from stream gauges rebroadcast through geostationary weather satellites. This image of Hurricane Harvey was captured Aug. 16 by the Advanced Baseline Imager on GOES-16. Credit: NOAA

Those rebroadcasts were transmitted at frequencies of 1675 and 1680 MHz, an area of the electromagnetic spectrum the Federal Communications Commission and National Telecommunications and Information Administration have traditionally reserved for satellite services. In response to growing demand by terrestrial communications firms, the FCC and NTIA are considering a proposal that would allow wireless towers to transmit information in the same frequency range.

In a paper slated for release Jan. 11 at the American Meteorological Society meeting here, “Bracing for Impact: Terrestrial Radio Interference to Satellite-Based Services,” Tom Powell, Dave Lubar and Karen Jones of The Aerospace Corp. warn that powerful terrestrial signals in the 1675 to 1680 MHz bands could interfere with receivers designed to track the much weaker signals transmitted by navigation and meteorology satellites.

“We all rely on that information and to monitor water levels up and downstream from reservoirs or retention basins,” Fitzgerald said in an interview. “The information is vitally important to safety.”

The stream gauges Fitzgerald watches are among the 28,000 sensors that collect water, wildfire and air quality that is rebroadcast through GOES satellites. At a slightly higher frequency, between 1681 and 1692 MHz, GOES satellites transmit imagery, science and space weather data. Terrestrial communications demand also threatens the federal government’s exclusive use of that spectrum.

“We are trying to help the public understand that spectrum is involved in the critical information flow that comes from the satellite to a user, public or private, that can’t afford to miss that data,” Lubar said.