UK to Defend Homeland With eLoran

Yesterday we posted about a newly released report from the UK government on critical infrastructure and its dependence on satellite navigation systems. Today an official UK policy letter was made public that says;

“The UK Government is therefore supportive of any progress towards initiating and maintaining an operational eLoran network that can provide position, navigation, and timing services and will lend support where appropriate to aid its establishment and continued use.”

This letter was written last year after a report by London Economics showing the devastating impact to the British economy of an extended GPS/GNSS outage. Publication of the letter was delayed until the release of this most recent report. In the interim, the position of UK Minister for Government Efficiency and Resilience has been rolled into Minister for Implementation and moved from Caroline Nokes, who signed the letter, to Oliver Dowden who endorsed the report released yesterday. Dowden was appointed just this month. We understand he and his staff are examining how to move forward on this and other issues. 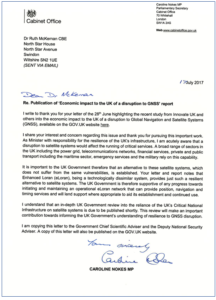