“Threats to GPS Real & Relevant” – US Dept of Homeland Security 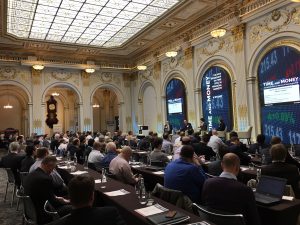 Speaking to a group at the New York Stock Exchange, a Department of Homeland Security official warned about the danger of GPS disruptions.  David Wulf, Acting Deputy Asst Secretary for Infrastructure Protection, said “Threats to GPS are real and relevant.”

Wulf said that the department had responded to this threat by publishing best practices for GPS users. Also that the department’s Science and Technology directorate was working with NIST to develop standards for competent GPS receivers.

When asked about the government’s multiple announcements that it would build an eLoran system to complement and backup GPS, Wulf said that DHS was working with the departments of defense and transportation on a report on GPS backup systems required by Congress in 2016.  He indicated that this would be completed in June of this year.

We note that Congress mandated the report be submitted by December 2017.

Wulf said that there would be two parts of the report on requirements and alternatives.  The first part would discuss timing needs and would be issued before June.

The event at the stock exchange was “Time and Money II,” the ATIS workshop on time sync requirements in financial markets.