War In Space: How The Air Force Is Preparing, And What Might Go Wrong – Forbes 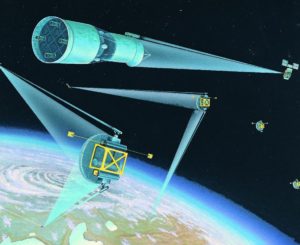 Blog Editor’s Notes: Almost every official advocating for resilient space systems we have heard or read about is only looking for solutions that can happen in space.

Complementing space systems with terrestrial systems that provide similar services deters enemy action against space assets, is almost always less expensive than solutions in space, and protects the nation against a wider range of threats.  – So we are safer for less money.

At what level must an official be in order to look across stovepipes and consider the nation’s best interests?

War In Space: How The Air Force Is Preparing, And What Might Go Wrong

War in space has begun. Although the details are secret and the action so far is mostly non-kinetic, U.S. rivals such as China are investing heavily in ways of degrading or destroying space-based capabilities on which America’s military and civilian economy depend. A report by the Pentagon’s most prestigious panel of advisers, the Defense Science Board, warned last year that electromagnetic threats to U.S. satellite communications “have rapidly escalated in the last few years,” and likely will continue growing in the future.

These threats have the potential to severely impair U.S. military performance in wartime. Consider, for example, the Global Positioning System constellation of satellites which provides precise navigational information for users operating on or near the earth’s surface. Without access to GPS signals, U.S. smart bombs would not work; executing complex military maneuvers would be much more challenging; and friendly-fire incidents would become more common because of the difficulty of locating forces in the fog of war.

And that’s just the beginning. Civilians depend on GPS to synchronize cellular telephone operations; track commercial aircraft and trucking fleets; support auto navigation systems; provide emergency services; perform precision agriculture; and conduct a vast array of other functions. So the growing possibility that GPS satellites might be destroyed in wartime, or their relatively weak signals degraded by jamming, or their ground control stations impaired by cyber attacks, has consequences stretching far beyond the military realm.