A grave threat to GPS and GNSS – Dr. Brad Parkinson in “GPS World”

Blog Editor’s Note: Dr. Parkinson certainly points out a grave threat. We are not sure about his speculation that this is “…possibly the gravest current threat…” to the PNT community. It seems to us that, even if the FCC were to allow the proposed operations, permission would be quickly withdrawn if operations began interfering with GPS signals.

It may well be that the gravest threat is the growing number of  illegal jamming and spoofing devices already in operation. A threat made all the more dangerous by the FCC’s almost complete lack of  ability to detect, eliminate and prevent future use of such equipment.

A grave threat to GPS and GNSS

In the coming months, the U.S. Federal Communications Commission (FCC) may allow high-powered, ground-based, communication transmitters to broadcast at a frequency near GPS L1. U.S. Department of Transportation (DOT) tests have shown that such transmitters effectively become jammers for many existing GPS receivers. 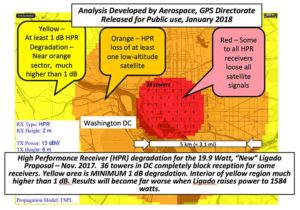 I believe that this possibility is the greatest current threat to the position, navigation and timing (PNT) community.

L1 is the primary band for GPS as well as for similar GNSS. For example, the international signal called L1C is to be centered at L1, albeit with wider spreading than the current L1 civil signal, C/A.

Why is this of critical importance? An economics study that only considered a small subset of benefits concluded that the U.S. alone realized $65 billion per year in direct economic value. A more complete recent study for the UK, extrapolated to the U.S., estimated the total impact of the loss of GPS to be over $3 billion per day for a five-day outage — a far greater rate. Virtually all GPS applications rely on the signals at L1. Thus, any threat to GPS is not simply an inconvenience, it would have great potential to do economic harm.

The PNT Advisory Board (PNTAB)has been trying to protect PNT, particularly GPS, and at the same time accommodate Ligado, a company that has requested repurposing of nearby spectrum. At our November meeting, we reviewed the Ligado proposal and framed a response that will be made public in due time. Meanwhile, these observations and conclusions are my own.