A trial this month in the United Kingdom resulted in the conviction of nine men for a wide variety of crimes including drug and weapons smuggling, money laundering, abduction, and torture.

As part of their operations, the gang used sophisticated electronic counter-surveillance techniques that included GPS jamming in order to evade police. An article in “The Daily Mail” shows the following device used by the criminals: 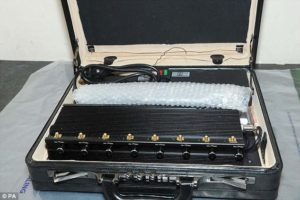 Experts tell us that this is a multi-function signal generator that jams GPS/GNSS, WiFi, LoJack, 3G and 4G cell phones. The GPS jamming function can prevent GPS/GNSS reception over an area hundreds of meters wide. A unit nearly identical to the one shown in the Daily Mail article is offered by many websites. Here is a photo of one offered by Jammerall.com: 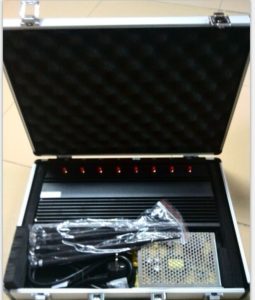 This is not the first time drug traffickers and other criminals have been found using jammers.  NBC News published an article last year that reported on incidents in several countries and that the FBI had issued an alert about such activities.

Charles Curry of Chronos Technology says that such devices are easily purchased from any number of websites. “Over the years I have identified over a hundred websites, the great majority of which are hosted in China.”

While systems to monitor for GPS/GNSS disruptions have been discussed by governments for years, to the best of our knowledge, no systematic monitoring, or even consistent random sampling has been established in the United States, United Kingdom, or Europe.