What if we lost GPS? That’s one thing worrying the Air Force secretary – LA Times

Blog Editor’s Note: This Los Angles Times edited interview with the Secretary of the Air Force, the Hon Heather Wilson, doesn’t spend a lot of time on GPS issues, despite the article’s headline. But it does confirm that folks at the highest levels of government know about our nation’s problem of over-reliance on a single and vulnerable source for essential PNT services.

We hope that Ms Wilson becomes an advocate within the administration for addressing this important issue. 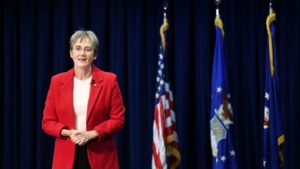 What if we lost GPS? That’s one thing worrying the Air Force secretary

Space has become an increasingly important area of operations for commercial industry and the U.S. military.

Plummeting launch costs and the miniaturization of powerful technology have encouraged more countries and companies to venture into space, making it a “common domain for human endeavor,” said Air Force Secretary Heather Wilson. On the ground, industries have risen around the use of GPS, or Global Positioning System, the space-based navigational system pioneered by the U.S. military.

The U.S. Air Force operates the current GPS satellite constellation and its associated ground facilities, and is planning for the next generation of those satellites. GPS service is provided to both the military and civilians.

“The Air Force leaders believe that by networking together sensors and weapons, they can get a much more potent Air Force than by simply focusing on airplanes alone,” said Loren Thompson, military analyst at the Lexington Institute. “Space provides a unique vantage point from which to observe things on the surface and to communicate beyond the line of sight.”

The Times recently sat down with Wilson while she was at the Los Angeles Air Force Base — home of the Space and Missile Systems Center — to talk about the role of space in the Air Force’s mission. Here’s an edited version of her comments.

Space isn’t the friendly place it once was

It used to be that space was a benign domain from which we observed and reported. It’s not that way anymore. In 2007, the Chinese launched an anti-satellite weapon and demonstrated their ability to destroy a satellite in orbit with a ground launch. They haven’t stopped there, and nor have the Russians. The Russians publicly announced their intention and their launch of a utility satellite, which is now on orbit, which they described as a maintenance satellite for other satellites. The question is, whose satellites are they seeking to maintain?

‘We practice as if we didn’t have GPS’

There’s not a military mission that doesn’t depend on space. And it’s not just the military. There’s multiple industries that depend [on] and use that GPS signal.

We [will release the] request for proposal for the GPS III satellites, the next generation of satellites, and we are moving very quickly on that procurement. We want those satellites to be robust, so they’d be harder to jam or interfere with.

As an Air Force, we also practice as if we didn’t have GPS. The people now, we take GPS for granted, so much that interference with those satellites would be a major hit to our economy.